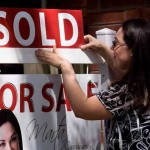 More than half of Canadians in a new survey are putting extra effort into repaying their mortgages — saving tens of thousands in interest payments. Find out more

“The mortgage insurers are a bellweather for consumers — particularly Genworth is a bellweather for first-time homebuyers,” Nick LeBlanc, a financial analyst at DBRS Ltd., said by phone Wednesday. “The continued strength of the housing market, stable economic conditions, and low interest rates, have helped out the Canadian consumer.”

Canada’s residential housing market has drawn concern from regulators and economists who say it may be 20% overvalued and that consumers are taking on too much debt. The low losses at Genworth show Canadians aren’t having trouble paying off their mortgage debt, while the increased origination highlights strong demand.

Genworth’s profit excluding some items was $1.04 a share, the Oakville, Ontario-based company said, beating the 93-cent average estimate of nine analysts surveyed by Bloomberg. Loan losses declined to 12%, a record low. Genworth forecast that loss ratio will rise to a range of 15% to 25% for the year.

Bank of Montreal analyst Tom MacKinnon raised his rating on Genworth to an outperform from market perform after the results were announced.

“The housing markets are performing well,” Genworth Chief Executive Officer Brian Hurley said in an analyst conference call. “The interest rate environment is stable and looks to stay that way for a while.”

Genworth Chief Operating Officer Stuart Levings cited Vancouver and Toronto as cities that are facing affordability pressure. Toronto’s home prices soared more than 76% in the last 10 years and Vancouver prices rallied 4.4% in June over the previous year to $800,689.

“The Canadian consumer has been able to service their debt,” LeBlanc said. “Even though debt levels in Canada are increasing, we’re seeing really low defaults. You’re not seeing strain there.”