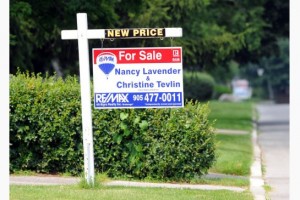 If Toronto, Vancouver and Calgary were removed from the house-price equation, the average national house price would have climbed just 4.3 per cent in September, year over year, notes CREA.

Expect house sales — and prices — to cool down over the next few months, and maybe even years, as this summer’s surge of buyers armed with the lowest mortgage-rate commitments ever peters out, housing watchers say.

Home sales were up 18.2 per cent across Canada in September, year over year, driven largely by buying sprees in Vancouver, Toronto, Calgary and Edmonton, according to figures released Tuesday by the Canadian Real Estate Board.

But even the board’s chief economist acknowledged that the unexpectedly strong pace of home sales the last few months “may be losing steam” and has largely just returned sales levels to where they were before last year’s dramatic downturn.

Sales had slumped so badly by last fall that transactions in September of 2012 dropped to the lowest levels seen in a decade, noted CREA economist Greg Klump. That’s making this year’s sales look even better by comparison.

The average price of homes sold last month in Canada was $385,906, up 8.8 per cent from the same month in 2012. But, that number was also driven up by an unexpected increase in interest rates, starting last May, that contributed to a significant spike in sales in major markets such as Toronto, Vancouver and Calgary.

Those cities saw a surge in buyers, armed with 90- and 120-day commitments for mortgages as low as 2.89 per cent, frantically trying to jump into the market before their low rates ran out and they were forced to renegotiate at rates that, today, are almost a full percentage point higher.

If Toronto, Vancouver and Calgary were removed from the house-price equation, the average house price would have climbed just 4.3 per cent in September, year over year, notes CREA.

But brace for a significant slowdown, warns Capital Economics economist David Madani in a note analyzing the September numbers.

“Home sales are getting pulled forward at the expense of later this year and next, as potential homebuyers jump into the market before mortgage rates rise any further. Accordingly, we expect home sales to flop in the not-so-distant future, which will once again apply downward pressure on house prices.”

In fact, the rise in prices also can be attributed to high demand at the same time that fewer homes are being listed for sale across the country, says Madani.

Bank of Montreal senior economist Robert Kavcic believes that the market has simply returned to historic norms and that homeowners — and buyers — won’t see anywhere near the price jumps of the last decade. He’s not expecting a correction in prices but, rather, annual gains of just 2 per cent in 2014 and below the 3 to 4 per cent annual income growth anticipated the next few years.

“Any worry about a hard landing in Canadian housing has quickly become a faint memory.”

Queen’s University real estate professor John Andrew expects to see sales taper off through November and into next year, but doesn’t anticipate a drop in prices, at least for low-rise houses.

He remains most concerned about the condo market, especially in Toronto where a record number of newly built units will hit the market in 2014.

Anywhere from 18,000 to almost 43,000 new units are slated for completion next year across the GTA, depending on construction bottlenecks. Some 80 per cent already have owners, but most have yet to make big final payments at mortgage rates higher than they anticipated a few years ago.

As a result, many of those units could hit the resale market, and further drive up the inventory of condos for sale, as buyers look to avoid higher carrying costs and cash out on gains made during the last two to three years while the unit was being built.

“I’m concerned still that there’s been a lot of overbuilding, but my biggest worry is what’s going to happen when all these mortgages come up for renewal in a few years, and at significantly higher rates.”