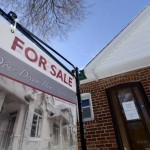 Royal Bank says Canadians have been slowing down the amount of debt they are taking on to buy real estate, easing concerns about household vulnerability.

The RBC paper notes that overall household debt accumulation remained flat-lined at 4.2 per cent growth in May, about the same level as the previous three months.

Outstanding mortgage debt stood at $1.23-trillion as the annualized growth slowed slightly to five per cent from 5.1 per cent in April.

But households increased their pace of non-mortgage borrowing, the bank says, to 2.2 per cent from two per cent in April.

RBC says the steady pace of debt accumulation overall should give some comfort to the Bank of Canada, which has called household debt the No. 1 risk to the financial system and economy.

With the housing market expected to moderate further, the vulnerability posed by overly indebted households is easing, RBC says, clearing the way for the Bank of Canada to move toward higher interest rates by mid-2015.

Meanwhile, business borrowing continued to strengthen in May, with short-term debt rising to 10.6 per cent from 9.6 in April.