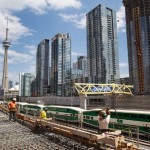 OTTAWA — Canada Mortgage and Housing Corp. says the pace of housing starts was down in October, compared with September, as the rate of new multiple-unit homes starting construction, including condominiums, slowed.

The agency estimates the standalone monthly seasonally adjusted annual rate was 183,604 units in October, down from 197,355 the previous month.

Economists had expected a rate of 200,000, according to Thomson Reuters.
CMHC says the pace of urban housing starts in October decreased across the country, with declines led by British Columbia and followed by Quebec, Atlantic Canada, the Prairies and Ontario.