TORONTO – Housing prices in popular U.S. snowbird destinations are rising but are still below peak levels seen in 2006, says a new report. 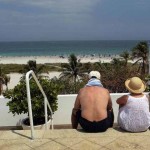 The outlook by BMO Financial Group says overall, housing prices in the U.S. have increased by 20% in the last two years, but are only about halfway to the peak levels seen eight years ago.

The average house price in Florida, which remains the most popular state for Canadian buyers, is US$124,000 — about half the price of a house in Canada.

There are more than 500,000 Canadians who currently own real estate in Florida, says the report.

“We also expect the U.S. greenback to rise moderately further against the Canadian dollar, boosting capital gains appreciation for Canadians who purchase U.S. property,” he said.