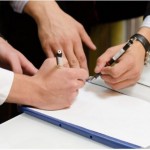 Ten per cent of Canadians surveyed say it’s okay to inflate your income when applying for a mortage, according to a new survey by credit reporting agency Equifax. DREAMSTIME

Ten per cent of Canadians surveyed say it’s okay to inflate your income when applying for a mortgage, according to a new survey by credit reporting agency Equifax.

And 9 per cent say they have lied on credit card or mortgage applications.

The numbers came as a shock to Equifax officials, given that the July survey of 1,500 Canadians was really aimed at gauging their concerns about protection of personal data.

“It’s a bad strategy,” stressed Ashby, noting that lying on any credit applications is a form of fraud. “Obviously it’s not sustainable. It means that people are concerned about their ability to get a mortgage. We definitely want to counsel Canadians to work within their means and approach their debts with financial responsibility.”

The survey also disclosed that only 23 per cent of Canadians know their credit score, and just 26 per cent knew their credit rating at the time they applied for a mortgage. That’s despite the fact a good credit score can be a major negotiating tool in getting lower interest rate mortgages from financial institutions.

A bad score — especially one you find out unexpectedly, as you’re down to the wire trying to close an offer on a house — can be crippling.

“We hear story after story of people who pull their credit report and find there are things on there (such as unpaid bills that belong to others) that shouldn’t be on there. To find that out in front of your mortgage broker can be a really unpleasant surprise.”

Mortgage broker Joe Sammut called the fact anyone would inflate their income “disturbing” and stressed that Canadian lenders have “multiple layers of safety caches in place” to make sure such claims are caught, especially in the wake of the U.S. housing meltdown, much of which was caused by overlending and applicants not even having to file proof of income.

“I’ve had people call me and say, ‘I make $80,000, but my employer is willing to write a letter saying I make $120,000.’ There are websites where you can get fake employment letters and pay slips. There are people out there willing to commit fraud, but it’s very minimal and I suspect it’s on the decline.”

Here in Canada, where lending rules are tougher than they have been in the States, mortgage applicants have to hand over T4 tax slips, employment letters and other documentation as proof of income before money changes hands, said broker Jake Abramowicz.

“Most people who call me say, ‘I don’t know what I can afford. Here’s what I make.’ I’ve never had anyone say, ‘Here’s what I want to afford, how much do I need to make?’

“It’s impossible to lie on your income these days — it would boggle my mind that someone would think they could do it.”

“I just tell them to come back and see me then.”

The Equifax survey also found that 79 per cent of respondents are more concerned than ever about protection of their personal information.

Some 81 per cent believe that lenders should be doing more to protect their personal information, so they aren’t at risk of fraud and identity theft, one of the fastest growing crimes.

According to police, identity theft costs the Canadian economy about $2.5 billion in losses every year and the total number of victims grew by 14 per cent in 2013, says Ashby.

It’s become such big business that Equifax now has a suite of products which, for about $15 a month, will provide regular credit scores and reports to consumers so they can track if anyone is applying for credit cards or mortgages in their name.

(By law, Canadians are entitled to a credit report as often as they like, but it can take two weeks to come by mail. To get it immediately from Equifax costs $23.)

Equifax Canada is even considering whether to join its U.S. counterparts in offering family credit rating protections to try to curtail the growing trend of identity theft among children — fraudsters who are using children’s social insurance and other sometimes easily obtainable information.

It’s known in the industry as “synthetic fraud” — using a child’s real name, but altering their age and other details so an 8-year-old may appear to be a 35-year-old, says Ashby.

It can take years until parents even realize their child’s ID has been used to fraudulently obtain credit cards or other loans.