OTTAWA/CALGARY • Surprise or not. Best candidate or not. Neither much matters. In the end, Joe Oliver’s appointment as Finance Minister was obviously the best choice for Prime Minister Stephen Harper. 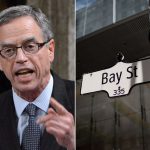 Theresa Tedesco: Canada’s new Finance Minister is a man of the Street.

Unlike his less buttoned-down predecessor Jim Flaherty, Montreal-born and Harvard educated, Joe Oliver looks and sounds every inch the elder statesman investment banker even though he’s been out of the financial business for almost a decade. Read on

Despite his proven competence with the Natural Resources file, Mr. Oliver, 73, is not likely to remain at his new post over the long haul. Perhaps, not much past the 2015 federal vote.

“By appointing someone who’s in his early 70s, the prime minister avoided choosing from amongst his potential successors, who are of a younger generation, and put that decision off until after the next election,” says Brian Lee Crowley, a public-policy expert based in Ottawa.

Mr. Harper would “consider that a great advantage.”

Some of the stars that appear to be rising are Tony Clement, now President of the Treasury Board, and Jason Kenney, currently Minister of Employment and Social Development, as well as Foreign Affairs Minister John Baird.

“Assuming that the government is re-elected, the prime minister would almost certainly regard that as an opportunity to … see what talent he’s got to work with,” said Mr. Crowley, managing director of the Macdonald-Laurier Institute, and someone who rubbed with Mr. Oliver when the new finance minister was still working in the financial world.

“I’m sure he [Mr. Harper] will want to restructure his cabinet at that point.”

Mr. Oliver comes to his new job with plenty of accolades and some concerns over his handling and style at Natural Resources.

The former head of the Investment Dealers Association of Canada and executive director of the Ontario Securities Commission is a first-time politician, having been elected as a Conservative MP for the Toronto area in only 2011. His business and legal knowledge  — an MBA from Harvard Business School and law degree from McGill University — made him an interesting choice for a cabinet post.

Mr. Oliver was officially appointed Finance Minister on Wednesday, one day after Mr. Flaherty announced his resignation after eight years as the No. 2 federal minister. Greg Rickford, 46, previously Minister of Science and Technology, takes over at Natural Resources.

Given his private-sector investment experience, Mr. Oliver “provides a solid background and understanding in the Finance job,” said Charles St-Arnaud, a Canadian economist at Nomura Securities in New York, who previously worked at the Finance Department and the Bank of Canada.

“He has also proved to be a very strong and energetic supporter for the Keystone XL pipeline, which has likely put him in [Mr.] Harper’s good book,” he said. “However, his lack of experience in Ottawa may be a bit more challenging when having to head a department that is so much at the center of economic policy, [and] decision-making and with multiple links with other organizations.”

Still, in his previous cabinet post, Mr. Oliver was not afraid to rock the boat and was a relentless champion of new pipelines to diversify markets for Canada’s oil and gas.

“He has been very focused on the market-access issue, which is the biggest issue facing the industry today,” said Brian Maynard, government affairs director at Marathon Oil Canada Corp. in Calgary.

Mr. Oliver increased the profile of Natural Resources portfolio by speaking at home and abroad about opportunities in Canada’s natural resources, and followed up by removing barriers, from streamlining pipelines’ regulatory approvals to promoting discussions with aboriginal communities.

He pushed for new regulations across various departments to improve transportation safety and was unusually accessible.

“He has been a huge champion for the industry,” said one industry insider.

If he brings the same “fire” to Finance, “there could be some interesting, creative things happen, particularly in the run up to an election.”

One area in which he faced criticism was in his dealings with environmentalists, which he lambasted for being opposed to all types of development.

His departure leaves a big void as U.S. President Barack Obama prepares to rule on whether to give a permit to the Keystone XL pipeline from Alberta to the U.S. Gulf. Mr. Oliver has been involved in discussions with the U.S. for a joint approach to greenhouse gas emissions for the oil and gas industry that could be proposed as a condition of Keystone XL’s approval.

In his new job, Mr. Oliver will carry Mr. Flaherty’s budget-balancing torch into the next election.

There is little doubt he will officially eliminate the deficit by the 2015 target, in time to head into the federal election, expected in the fall of that year.

Ottawa’s deficit was set at $2.9-billion in Mr. Flaherty’s 2014 budget, but padded with a $3-billion contingency fund, in case the global economy and ours soured in the meantime.

“There isn’t a long window from the budget to an October 2015 election,” said Avery Shenfeld, chief economist at CIBC World Markets.

“So unless [Mr.] Oliver decides on his own to step down, it’s likely that his term as Finance Minister will last for the remainder of the Conservative’s mandate.”