Canada won’t make any sudden changes to the country’s system of housing finance, even as the government looks at ways to reduce its role in the market, Finance Minister Joe Oliver said. 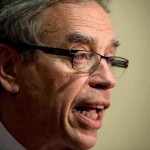 Canada’s finance minister is urging European countries to consider taking quick action to repair their flagging economies by following stimulus programs similar to the one that pulled this country out of recession. Read on Oliver said that while he’s studying proposals, such as the idea of the government passing on more risk to lenders, these are longer-term issues that don’t require immediate action. The government guarantees about $710 billion worth of Canadian mortgages through state-run Canada Mortgage & Housing Corp. and private mortgage insurers.

“We’re looking at things, but we’re not going to be doing anything dramatic,” Oliver said in an interview in Cairns, Australia, where he was attending a meeting of finance ministers and central bankers from the Group of 20 countries. “We don’t see the need for it.”

In the speech, Siddall outlined how his organization is “re-examining” its role to ensure the government isn’t distorting the housing market by assuming too much risk. Possible steps could include risk-sharing with banks, higher capital requirements or smaller regulatory measures to curb over-borrowing by some households, Siddall said.

“We certainly aren’t going to do anything precipitous,” Oliver said. “You don’t want to cause the very thing you are trying to prevent.”

On the risk-sharing proposal, Oliver said the government hasn’t made any decisions.

“Obviously it’s one of the things one looks at, but I don’t want to signal we’re doing anything,” he said.

Canadian housing has so far defied predictions of a correction with recent data showing an acceleration in resales, starts and prices. Policy makers have downplayed worries the market is at risk of a collapse, forecasting instead a soft landing. Oliver reiterated he doesn’t see a housing bubble.

In his speech, Siddall said that his organization’s research shows that even with some overvaluation, “there are no immediate problematic housing market conditions at the national level.” If prices don’t moderate as predicted though, Siddall said, it will strengthen the case for additional measures to cool the market.

“Our educated opinion is that growth in house prices in Canada will moderate,” Siddall said. “If we are wrong, and price growth remains strong or accelerates, we may need to look to macro-prudential counter-weights to avoid excesses.”

Until now, the agency has been taking smaller measures to remove some of excesses from the market and reduce the amount of insurance it has in force, which is capped at C$600 billion. In June, it announced it would no longer insure financing for condominiums. In February, the agency said it will increase premiums on mortgage insurance by an average of 15 percent. In 2012, the government gave the country’s banking regulator new to oversee CMHC.

CMHC also is planning to increase its capital holdings to protect from insurance losses and has done stress testing that shows it would have survived a U.S.-style downturn in the housing market, Siddall said in the speech.

CMHC insures mortgages against default, and its insurance is fully backed by the federal government. By law, Canadian mortgages with less than a 20 percent downpayment must be insured.

Bank of Canada Governor Stephen Poloz said Sunday that while housing remains a “vulnerability” for Canada, “we don’t see the housing market as particularly hazardous and we certainly don’t consider it to be a bubble.”

‘We’re not overly concerned but monitoring it very carefully,’’ Poloz told reporters in Cairns. “Over the course of the summer there was no perceptible reduction in household imbalances, while during the first half of the year we had seen a modest constructive trend.”

While no major policy changes are planned, Oliver said there could be similar smaller steps that can be taken if warranted. “That doesn’t mean we’re not going to take further steps,” Oliver said. “A lot of things as you know that have happened, they call it the sandbox policies, we believe moderated the growth.”

In a conference call with reporters from Sydney Sunday, Oliver reiterated the government wants to gradually reduce its involvement in the mortgage market. “Anything that we might consider would be of a marginal nature, like some of the steps that have been taken,” he said.

There have been calls for a more dramatic exit from the market by the government. In a June report, the Organization for Economic Cooperation and Development said Canada should consider lowering the amount of mortgage insurance CMHC can write, and eventually get out of the business completely to limit taxpayer risk.

“Right now, government takes practically all the risk,” OECD Secretary-General Angel Gurria said in a June 11 interview. “This is a contingent liability of the taxpayers of Canada. There has to be some risk borne by the intermediary institutions and the borrowers themselves.”

Oliver also told reporters on the conference call he spoke to U.S. Treasury Secretary Jacob J. Lew at the Cairns meeting about U.S. companies that seek to reduce taxes by relocating abroad, a practice known as inversion.

Lew said Saturday his department is finishing work on measures that would limit inversions.

Oliver said it’s not clear whether the changes will be retroactive, a move that might affect Burger King Worldwide Inc.’s takeover of Canadian coffee and doughnut retailer Tim Hortons Inc. “We don’t know just how far that might go, whether there would be an attempt at retroactivity,” Oliver said.

He said Canada hasn’t been targeting companies for potential inversions. “The reason that we have pursued a low- tax policy on the corporate side is to attract and retain capital, which results in economic growth and employment.”

If you use any systems that run Unix, Linux, or Mac OS X, there is bad news. A rather nasty bug has reared its head, and exploits are already in the wild BlackBerry Passport may grab headlines, but this lower-profile product is winning the most praise

Blend lets users seamlessly bridge messaging and content between devices irrespective of operating systems, which could be key to BlackBerry’s enterprise strategy Making salaries public: The financial equivalent of leaking nude selfies, or a way to build trust?

In our imaginations, nobody is paid what they’re worth, and that might make it tough to get revved up for work CRTC should let market decide because TV pick-and-pay proposal is ‘deeply misguided,’ warns CD Howe

Major Canadian think tank says given the technological revolution, proposals to mandate channel choices are an exercise in futility Think your property taxes are high? Try being a commercial landlord

Toronto, Vancouver, and Montreal continue to post the highest commercial to residential tax ratios, all in excess of 4:1, according to the Real Property…