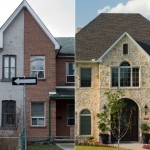 Many couples, stunned by the value of their homes in Canadian urban centers like Toronto, Calgary and Vancouver, are pondering trading city life for opportunities to cut costs in the suburbs or beyond.

Slightly more than three years ago, I sat down with my wife after a lousy commute and discussed why we were still in Toronto.

Sure, she had a good job in the city, but I was freelance, and with two young children in elementary school, we pondered whether there were other options.

The positives were clear — if we left the city it would change our financial position dramatically. We could trade our Scarborough rebuild in an up-and-coming part of the city for a house in the best area of a city like London, Ont., where we both went to school.

And the best part? We could buy that house in London, with more room in a better area for about 60% of the value of our Scarborough home, which saw its price skyrocket in the seven years we owned it.

It wasn’t that tough a decision; in 2012 we sold our house, packed a moving truck and rolled down the 401 to London.

It is a scenario that is becoming increasingly common — couples, stunned by the value of their homes in Canadian urban centers like Toronto, Calgary and Vancouver, are pondering trading city life for opportunities to cut costs in the suburbs or beyond.

Freelance writer Peter Robinson and his wife Jody, an elementary teacher, faced this scenario in 2010. The couple, who owned a small house on Toronto’s west side, started considering how they’d move forward. With an expanding family, a bigger house was a necessity. But the price of a larger home was daunting and they started considering their options.

“I could work from anywhere and Jody was willing to make a commute to her school in Brampton,” says Mr. Robinson. “She decided she’d bite the bullet and spend an extra five hours a week commuting if we moved.”

Robinson says the couple wasn’t enjoying the benefits of Toronto in the way they were prior to having children, a common theme among young families considering a move from the city.

“Some people leave the city because they hate it,” says Mr. Robinson. “That wasn’t our case, though the traffic is always bad.”

The couple listed their 1,300 square foot home for $500,000, up $140,000 from when they purchased it a few years previous, and started looking in Barrie, about an hour’s drive north of Toronto. They were able to buy a house in Barrie for $385,000 and double their square footage within walking distance to a nearby school.

“We moved to the quintessential upper middle-class neighborhood,” says Mr. Robinson, who grew up in Barrie. “It takes a mental leap to move if you grew up here. But people in the city don’t realize how good life can be in the suburbs.”

Many moves are driven by the equity couples have in their homes. Anne Carbert, a career counselor, moved to Toronto in 1996. Ms. Carbert, along with her partner, Don, a radio broadcaster and writer, started considering leaving their Riverdale home largely based on the appreciation of its value.

“The goal was ‘let’s get out from under the city mortgage when we have the opportunity,’” she says. The couple moved to Stratford, Ont., and are currently renting while they consider real estate opportunities.

One thing is clear, they expect to be able to find exactly what they want for less than half the price of their $800,000 Toronto home.

Ryan Tracy, who taught at Durham College while living in Whitby, saw real estate prices as an opportunity to make a change in his career. Along with his wife and two small children, Mr. Tracy, 31, decided to pursue a job in Miramichi, N.B., as the general manager of a semi-private golf club.

“We were really sick of the rat race,” says Mr. Tracy, whose wife, Amanda-Lee Cassidy, has a job with Scotiabank. “We wanted to follow the opportunity and the notion of having a house outside of a city really appealed to us.”

The couple has been searching for property near Miramichi, a location in stark contrast to their current situation in the Toronto suburb of Whitby, where they have a 1,800 square foot home on a small lot.

“We can use our house as an asset, which you can’t always say,” says Mr. Tracy. “The notion of selling our home and buying a home and having no mortgage, that’s quite something. They say the majority of people in the city will still have a mortgage well past 60.”

Mr. Tracy and his family will spend some time in housing supplied by his workplace while they look to purchase their home.
“It is such a big difference than living in the GTA,” he says. “Most lots [in Miramichi] are an acre and you can get them for $200,000.”

Like many who have made the move out of one of Canada’s big cities, I don’t regret it. Yes, property taxes are higher here, something that shocks my Toronto friends. And I certainly make the drive into the city more frequently than I’d like, though I can try to find off-peak times to battle traffic.

But we also traded up in many ways, moving from a mid-price area of old Scarborough, full of post-WWII bungalows, to a cul-de-sac near a private golf course.

And many young families who leave large urban areas find cost savings in areas like daycare, which, for two children, cost more than our mortgage when we were in Toronto.

The biggest concern many have when leaving is how they’d ever afford to return if work necessitated it.

Neither do I. And thankfully, for the foreseeable future at least, it isn’t something I need to consider.