Watch the bond market and QE moves for early warnings that interest rates will start to rise in Canada. 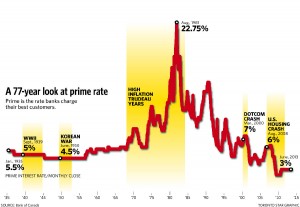 The interest rate party for borrowers is almost over. After almost five years of historically low rates, we’ve started to see some upward movement in the cost of money.

Most people watch the central banks for indications that rates are about to take off. But that’s not where the real action is. It takes place in the rarefied world of the bond market where institutional traders like banks and pension plans operate. By the time the Bank of Canada gets around to acting, the bond market will have left it in the dust.

The first warning shot occurred a couple of weeks ago after some governors of the U.S. Federal Reserve Board indicated that the time has come to consider scaling back the quantitative easing (QE) program that is pumping $85 billion a month in new money into the economy.

Professional bond traders took that as a signal that interest rates would start moving higher. Bond prices dropped sharply (as yields rise, prices fall). The rate on 10-year U.S. Treasuries shot through the 2 per cent barrier and kept on climbing. On June 19, they spiked to 2.35 per cent after the Fed confirmed that it plans to begin dialling back QE later this with a view to ending the program by mid-2014.

Stock markets around the globe sold off. Interest-sensitive securities of all types plunged, leaving investors shell-shocked. Besides bonds, defensive stocks such as utilities, REITs, and preferred shares were all hit hard, as were the mutual funds and ETFs that invest in them. I was deluged with emails from worried readers asking what had happened.

Related: 6 things we can learn from the CPP’s investment strategy

I think the stock market sell-off was overdone and that the bond market will rally. But as far as bonds go, it will only be a temporary respite. If the economy continues to improve, interest rates are going to move higher in the next few years, perhaps more quickly than many people expect. The impact will be significant, both for borrowers and investors.

Anyone with a variable rate loan will see carrying costs move higher. Former Bank of Canada Governor Mark Carney repeatedly warned of the danger this would create for households on tight budgets. For every $100,000 in debt, interest costs increase by $1,000 annually with every 1 per cent rise in rates. Currently, most big banks are charging prime plus 1 per cent for a five-year variable rate mortgage. With prime at 3 per cent, that means the cost to you is 4 per cent.

When rates start to move higher, the trend normally continues for a long time — perhaps several years. As recently as the fall of 2007, the prime rate was 6.25 per cent, meaning that a variable rate mortgage would cost 7.25 per cent to carry. That’s an increase of more than 80 per cent in your interest cost.

How high can rates go? Well, in the early 1980s prime actually peaked at 22.75 per cent! That was an era of high inflation and I don’t expect to see anything even close to that again. But it gives you an idea of the risks involved. One solution is to lock in a longer term mortgage now. Another is to keep the variable rate loan but increase the monthly payments. You’ll reduce the principal faster and create a cushion in your budget for when rates rise.

For investors, higher interest rates will mean more downward pressure on the prices of the defensive securities that have performed so well in recent years. That’s because as rates rise, low-risk alternatives like new government bond issues and GICs become increasingly attractive. If you can get 5 per cent from a guaranteed investment certificate that’s covered by deposit insurance, you’re going to expect to receive more from riskier REITs and dividend stocks. For that to happen, they have to increase their payouts or watch the market price decline. For example, RioCan REIT lost 14 per cent of its value between April 30 and June 13. During that period, the yield on the units increased from 4.76 per cent to 5.54 per cent, based on an annual payment of $1.41 per share.

In this case, there are a number of steps you can take to protect your money. The most obvious one is to increase your cash position by selling some vulnerable assets. As rates rise, so will the returns on high interest savings accounts and short term deposits.

Bond fund investors should consider shifting more money into short-term funds and ETFs (maturities of less than five years). They are not immune to losses but the downside is minimal compared to the risk inherent in, say, a 20-year bond. Alternatively, if you own bonds directly (not through a fund) keep it until maturity when you’ll be reimbursed at face value. In that case, you can ignore price fluctuations.

None of this is going to happen overnight. Despite the recent rate shock, this is likely to be a gradual process so you have time to make adjustments. Just don’t make the mistake of assuming the low interest era will last forever. It’s already started to wind down. Take whatever action is necessary before the trend starts to accelerate.

Gordon Pape is editor and publisher of the Internet Wealth Builder newsletter. His website is www.BuildingWealth.ca