Consumers facing record housing prices are probably increasingly tempted to go with a floating rate mortgage and all the risks that come with an interest rate linked to prime. 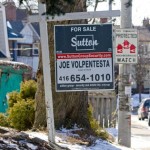 The lure is right in your face on every mortgage rate comparison site. The five-year fixed-rate mortgage has dropped as low as 3.09% with discounters and the major banks aren’t too far off that rate, most of them offering special deals. All this comes as yields in the bond market have dropped, sending fixed rates down.

Floating rate mortgages are as low as 2.35% with the discount off the prime lending rate 65 basis points. Better yet, it has never been easier to get a variable rate mortgage since the government changed the rules in April 2010 so anyone applying for a variable rate can qualify based on the five-year posted rate.

Vancouver and Calgary home sales still climbing with prices up

2,530 homes were sold in Vancouver in February, a 40.8% increase from a year ago, while Calgary sales jumped 8.7% from last year. Continue reading

The qualifying rate is based on an average of the six big banks’ posted rate for a five-year closed mortgage. Declining bond yields have lowered that qualifying rate to 4.99%.

The decline may not sound like much but Rob McLister, editor of Canadian Mortgage Trends, says it means a consumer with a $300,000 home and 5% down needs 2% less income than they did just a few months ago.

Ottawa changed the rules about four years ago to tilt the playing field in favour of locking in your mortgage. When you lock in your mortgage for a term of five years or longer, you are able to use the rate on your contract for determining how much you can borrow. Go variable and you must use qualifying rate which is still almost 50% higher.

“There has been talk of changing it, speculation that the [Office of the Superintendent of Financial Institutions] will mandate the banks use the qualifying rate for five years terms and longer,” said Mr. McLister, noting nothing has happened yet.

The federal government tends to like the idea of consumers locking in their mortgages because it offers protection from a sudden jolt in the prime rate — even as the Bank of Canada looks poised to go a record five years without moving its overnight lending rate.

Consumers are probably lured more by deals than anything else and the past year saw well-advertised rate wars over five-year fixed rate mortgages with the rate dropping to 2.99% for the term.

The Canadian Association of Accredited Mortgage Professionals said in a recent study that 82% of purchasers in 2013 went with a fixed rate product. The tide clearly turned last year because CAAMP says 67% of  consumers with a mortgage are in fixed. The percentages are climbing for locking in.

Mr. McLister says the general rule is when the gap between the five-year fixed and variables reaches 100 basis points or one percentage point, people start to shift to a floating rate.

We don’t know what a good interest rate is anymore, we really don’t

“You’re talking about somebody who lent money at 21%,” said Laura Parsons, a Calgary-based mortgage specialist with Bank of Montreal, about the difference in rates. “We don’t know what a good interest rate is anymore, we really don’t.”

Ms. Parsons says fixed remains as popular as ever because the rate is still very low by historical perspectives. She suggests if you do pick a variable mortgage, take the savings compared to fixed rate and apply it to the principle.

“You set your payment higher in case the interest rate does change,” says Ms. Parsons. 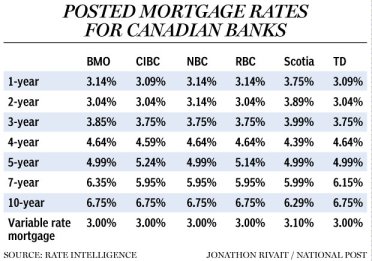 Based on monthly payments, you pay $54,333.66 in interest over the five years of your mortgage at 2.35%. Raise that rate to 3.09% and the interest comes to $71,472.09. That savings could be pumped back into your mortgage, lowering the principle owed and further reducing interest costs.

Jim Murphy, chief executive of CAAMP, says the easier qualification and low rate might push a few people back into variable but a fixed rate of 3% is tempting to lock down.

“You look at the news and it just seems the Bank of Canada is unlikely to raise rates,” said Mr. Murphy, who doesn’t think overnight rates will go up this year or possibly next year.

“That’s a year where you can have these rates,” he says, referring to savings from a variable rate product.

With house prices still at all-time highs, it’s easy to see why consumers would be tempted by the savings.