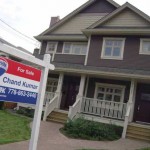 You don’t have to believe in superstition for it to hex your house, if the results of a forthcoming Canadian study are any indication.

What bubble? Canadians have their mortgage covered, study shows

Mortgage arrears are actually going down in just about every market across Canada — making a U.S.-style meltdown unlikely,Conference Board says

Reporting in the journal Economic Inquiry, researchers uncover enormous costs associated with “magical thinking” in real estate transactions in neighbourhoods with a high concentration of Chinese residents. The good news, however, is that they also identify payoffs — on average, around five figures — when superstitions run in a seller’s favour.
“We do find premiums and penalties associated with numbers that are thought to be lucky or unlucky in the Chinese culture,” said lead author Nicole Fortin, a professor at the University of British Columbia’s Vancouver School of Economics. “And these are really sizable transactions.”

Analyzing nearly 117,000 home sales between 2000 and 2005, researchers discovered that in areas whose share of Chinese residents exceeded the metro average, houses with address numbers ending in ‘4’ were sold at a 2.2% discount while those with numbers ending in ‘8’ were sold at a 2.5% premium. Four is associated with death in Chinese culture, and eight with prosperity.
Given the average house price of $400,000 during the study period, Fortin said superstition ultimately meant the difference between an $8,000 loss or a $10,000 gain in comparison to houses with addresses ending with any other digit.
“Real estate agents are very aware of this, and they exploit it,” Fortin said.
In one Vancouver ad, for example, she found eight of 20 homes aimed at buyers from mainland China ended in ‘8,’ as did the asking price of 11 of the homes. Similarly, a 2012 analysis by Trulia.com found that in Asian-majority neighbourhoods, the last non-zero digit of an asking price ended with ‘8’ in 20% of listings — and 37% of those priced at a million or higher — versus just 4% for other areas.
Fortin cites important public policy repercussions, noting that some people will petition to change their addresses — often by subdividing or via another legal loophole — to make their properties “luckier.” One of her own neighbours, in fact, had the last number of his home altered from a four to a six.
“I wondered why he didn’t get an ‘8.’ He probably tried,” Fortin said. “But should municipalities allow people to change their address just because they don’t like the number?”
In Canada, where people of Chinese descent account for 5% of the population, Fortin said the implication is that something as seemingly innocuous as a home address could affect whether a property flourishes or is left to deteriorate.
To wit, study co-author Andrew Hill emphasized that disbelief in such superstitions doesn’t inoculate against them.
“If everyone knows that these belief premiums and penalties are going to persist — even if they don’t believe in (the same thing) — it can have an effect,” said Hill, assistant professor of economics at the University of South Carolina. “As a property investor, it just makes no sense to have a house number that could lose you money.”
Importantly, however, Edmonton real estate agent Taylor Hack said emotion can overcome reason in almost any purchase of a principal residence, regardless of cultural background.
“We have to take that into consideration when working with anyone,” said Hack, of Remax River City. “Everybody has their own level of superstition. If some people were aware that a traumatic incident happened in the home, they’d have trouble with it.”