No matter what statistics show, Canada’s housing boom is about to end, experts say 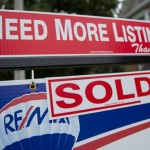 It might be hard to convince some Canadians the end of the housing boom is near based on new statistics from the Canadian Real Estate Association which show prices still rising.

Marriages, of course, get into trouble for all kinds of reasons, and rarely are they simple ones, but divorce lawyers and those in the real estate industry say that — whether we like to admit it or not — it’s an unavoidable reality that Canada’s red-hot real estate market is adding a thorny new dimension to marital strife.

But the growing consensus, even in the face of record valuations for homes in Canada’s three most expensive cities, is that prices will flatten out — a thesis even supported by one of Canada’s largest real estate companies.

Ottawa-based CREA said Wednesday that sales across the country were up 10.6% in September from a year ago, though down 1.6% from August. The average price of a home climbed 5.9% from a year ago to $408,795.

But even Calgary, Toronto and Vancouver are unlikely to see the same gains in 2015 and Canadians in general are going to have to get used to a new reality in the housing market, where price gains drop below long-term averages, says Royal LePage chief executive Phil Soper.

“To be clear, we expect home prices to continue to grow in the months ahead, but at a slower rate than we have seen in recent years,” he said. “I don’t see prices going negative. Over the last 60 years home prices have appreciated in this country on average 5%. We are going to have more and more markets below that.”

Buyers entering the market today could be in for a long period of no growth in the price of their home but Mr. Soper says that’s probably not something they’ll be worried about.

“Buyers seem to reach a point in their life cycle, whether age, marriage or money saved, where they want to buy a house and enter the market regardless,” he says.

But David Madani, an economist with Canada Economics who has called for a major correction, wonders whether some consumers are even prepared for a flat market let alone one that is falling.

“What concerns me is some buyers seems to have this view that prices can only go up,” says Mr. Madani. “People feel it’s a one-way bet. A lot of younger people seem to think that if they don’t get in now on the home ownership ladder, they’ll miss out. Some of these people will come to regret this decision. In the more expensive markets, it’s almost like a capitulation where they say ‘If I don’t buy now, I’ll never own a home’. This is what happens in a housing bubble.”

Finn Poschmann, vice-president of research at the C.D. Howe Institute, says you can’t deny there is a sense of “getting in while the getting is good” but adds there is a big difference between prices tapering off and declining.

He does says debt levels are manageable for now but there’s not much room for them to increase which would help fuel price growth. “The growth rate [in prices] we have seen simply will not be sustained forever simply because it can’t be, whichever the major market you are looking at,” said Mr. Poschmann.

“I think there is still some temptation [to take on more debt],” said Mr. Tal. “If there is an increase in prices it will come because of demand [driven by cheap mortgages]. But mostly I do think this is a market that is getting tired. If you want to flip, you have no reason to be in this market. If you want to live in a place, interest rates are still low.”