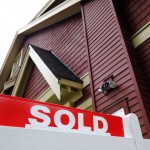 May was a phenomenal month for existing homes sales across the country but the jump in activity might say more about the harsh winter than the state of the market.

The Calgary housing market is so hot that an economist reported Tuesday that only 15 condominiums in the city remained built and unsold last month. Find out more

The Canadian Real Estate Association said Monday that sales in May jumped 5.9% from April which was the largest monthly increase in more than four years. Sales jumped in 80% of the markets surveyed by the group.

“Over the past 25 years, that widespread a monthly sales increase has been recorded only a handful of times,” said Beth Crosbie, president of CREA.

The group said there was a “delayed start” to the spring buying season as people deferred putting their homes on the market until the end of a harsh winter. With summer just about here, the group doesn’t think the pace of the last month can be maintained.

That’s a view held by many in the market.

“I think you are seeing the rougher winter held back supply and then it came on stream. It’s starting to balance out a bit,” said Martin Reid, president of Home Capital. “We think the price appreciation we saw in cities like Toronto will normalize.”

The average price of a home sold across the country in May reached $416,584, a 7.1% increase from a year earlier. Remove Greater Toronto and Greater Vancouver from the equation and the average price was just $336,373 last month with prices up 5.3% from a year ago.

CREA isn’t predicting any sort of crash and says sales should reach 463,400 this year, buoyed by continued low interest rates. At that level, sales would be up 1.2% from a year ago. By 2015, it expects another 0.9% increase in sales.

Prices also have some room to grow, says the group which is predicting the average home will sell for $404,300 this year, a 5.7% annual increase. Prices are forecast to only rise 0.7% next year.

Mr. Reid thinks price increases will be flat to 5% this year depending on the market with Toronto and Calgary being the exceptions. He warns people might need to get used to a new reality in housing.

“Price appreciation will be a lot slower than what we’ve seen over the last 10 years over the next few years though we see sales activity as reasonably good,” he said.

Robert Kavcic, an economist with Bank of Montreal, said while the housing market looks “balanced and sturdy overall,” once you check a little more closely you see individual markets like Toronto and Calgary are performing better.

“One reason policymakers might be a bit hesitant to act again soon is that strong price gains are confined to a few select markets, or even sub-markets, while a wide swath of the country (at least geographically) is seeing downright dreary conditions,” the economist said Monday.

Robert Hogue, senior economist with Royal Bank of Canada, cautioned that the huge jump in sales activity in May probably won’t hold up for the rest of the year.

“For the most part, [May sales] represent a temporary burst that will not be sustained much longer because there is minimal pent up demand to satisfy,” he said. “We expect the Canadian housing market to enter a moderation phase later this year once long-term interest rates start to raise.”