The oil that fuelled Calgary’s housing boom has created the conditions for a bust. 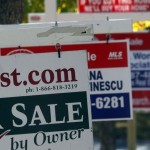 “The warning signs are out,” said Gerald Soloway, chief executive officer of Home Capital. “It’s only prudent for everybody who participates in that market to heighten their alertness.”

The warning signs are out More than five years of rising oil prices spurred thriving sales of million-dollar trophy homes in Calgary and a doubling of home prices in the last decade. As the oil crash forces energy firms in Alberta to cancel projects and fire workers, housing sales fell the most on record in December and January, with price declines expected to follow. Home Capital has begun to factor in a 10% drop in Alberta home values when making loans, Soloway said.

Alberta “has gone from the top spot in the economic growth rankings to second from last on the provincial leader board,” said Derek Burleton, deputy chief economist at Toronto-Dominion Bank, in a note to clients. “A significant softening in job markets will set the stage for a second major housing correction in Calgary and Edmonton” not seen since 2008.

Related Mortgage risks lingering in the shadows from non-regulated lenders, says CIBC Canadian home sales drop 3.1% as ‘sense of panic’ sweeps western markets The more than $100 billion invested in the province’s oilsands in the decade to 2012 has transformed Alberta’s biggest city, Calgary. Its population jumped 16% to 1.2 million in the five years to January while the growth in energy, manufacturing and retail jobs kept unemployment below the national average. The provincial revenues from oil allowed Alberta to build a billion-dollar hospital and expand its airport.

With the price of oil plummeting more than 50% since June, the Alberta economy is grinding to a halt. CIBC said this month that the province may enter a temporary recession. Citigroup Inc. forecasts that West Texas Intermediate crude, which currently trades at around $50 US a barrel, could fall to the $20 range amid a global supply glut.

Suncor Energy Inc., Canada’s largest oil company, said in January it would cut 1,000 jobs and lower its 2015 capital budget, which could limit new hires. Royal Dutch Shell Plc is firing as many as 300 employees from a project in northern Alberta, and Civeo Corp., a Houston-based owner of energy-worker camps, said it had eliminated 30% of its Canadian staff.

Home Capital, which has 5.1% of its $22.6 billion of mortgages in Alberta, is curtailing lending in the province. The Toronto-based company will continue to avoid some areas completely, including Fort McMurray, the heart of the province’s oil industry, CEO Soloway said. The lender will also examine applications from energy industry workers more critically in the wake of the region’s job cuts, he said.

The insurer expects its costs to cover bad loans to rise, paying 20 cents to 30 cents in claims for each premium dollar earned in 2015, according to the conference call. Last year the company paid 20 cents.

That expense may increase to as high as 34 cents by 2016, according to Bank of Montreal analyst Paul Holden, who adjusted his earnings forecast for the company on higher delinquency and lower sales in Alberta this year and next. Genworth has 24% of its $356 billion of insurance in Alberta, Saskatchewan and Newfoundland, the three regions most dependent on oil.

“We foresee storm clouds on the horizon in the more oily parts of the country, namely Alberta, which we expect will put more significant pressure on the loss ratio,” Holden wrote in a Feb. 11 note. “The housing market fundamentals in Calgary do not look good.”

Genworth MI shares have plunged about 24 per cent since Nov. 6 when its parent company, Genworth Financial Inc., posted a record quarterly loss and its credit was downgraded.

Genworth MI divides Alberta into about 20 economic regions and is monitoring each for sensitivity to oil at $35 a barrel, chief financial officer Craig Sweeney said on the Feb. 11 conference call. The insurer said it’s expecting a three per cent to five per cent drop in house prices in Alberta starting in the middle of this year.

“The likelihood of a regional economic slowdown has increased,” Sweeney said.

Vince Degiuseppe, a real estate agent in Calgary who sells about 20 homes a year, said demand is falling. Degiuseppe listed a home for a couple for $500,000 in November amid oil’s slide, and they’ve cut the price several times to $480,000. At an open house this month, the few offers were all below the listing price.

The number of homes changing hands in the province plunged 44% in December and January, the most for the two-month period since 1988 when the Canadian Real Estate Association began tracking the data. Royal Bank of Canada, the nation’s second-largest lender, lowered its forecast this month and now sees sales of existing homes in the province sliding 16 per cent this year. Toronto-Dominion Bank, the largest bank, said sales in the province would drop 31% this year and forecasts a 5.1% average price cut.

As the housing market declines, demand is rising for rental properties, according to Mainstreet Equity Corp. Alberta was the fastest growing province for rental revenue in the quarter ended Dec. 31, according to the Calgary-based property manager.

Average vacancy on the company’s units in Alberta declined to 5.8% in the quarter from 7.6% in the year-ago period, and rent jumped 10% to $1,022 per month. Mainstreet has about 60% of its properties in Calgary and Edmonton, according to financial documents.

Residents of Calgary recall living through this boom and bust cycle during past swings in oil prices. “We’ve seen this show before,” said Ted Zaharko, a real estate broker who’s been in business for more than four decades. “Albertans are a hearty bunch and we’ll get through this again.”

He said this downturn won’t be as severe as the one in the 1980s, when the oil services industry suffered from both a global recession and oil price decline. At the time, energy companies folded and unemployment jumped to 11 per cent, while mortgage rates of more than 15% made homes unaffordable.

Today, those rates are at record lows after the Bank of Canada cut its lending rate to 0.75% this year, with the country’s six largest lenders also reducing borrowing costs.

“It’s a little bit like driving through a snowstorm,” said Soloway of Home Capital. “You don’t expect it to be permanent, but it’s going to be around for a while and you just slow down and drive carefully.”