Mortgage rates today are way below normal. Or are they- Consult with Bruce Coleman, Vancouver Mortgage Broker 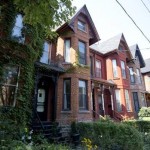 With the fixed five-year mortgage rate up roughly two-thirds of a percentage point or more, the costs of buying a home are rising out of reach for a generation of first-time buyers.
(Gloria Nieto/The Globe and Mail)

Finance Minister Jim Flaherty called Canada’s low interest rates an “anomaly” last week, echoing warnings that other government officials have been making since 2009. But one of the country’s best-known economists believes today’s rates are closer to normal than many think.

Benjamin Tal, deputy chief economist at CIBC, caught viewers off guard in a recent webcast with a mortgage company TMG The Mortgage Group. Whereas most economists have been calling for the Bank of Canada to lift its 1 per cent key lending rate back to a more normal 3 per cent, Mr. Tal thinks that these days, “normal” is significantly less.

“The speed limit of the economy has been permanently reduced,” Tal said. Inflation, the key rate threat, is extraordinarily low at 1.1 per cent. And the pace of economic growth is in a long-run downtrend, with few signs of bucking that trend.

Consequently, “The new normal is much lower interest rates than there used to be…The new normal would be maybe another 100-125 basis points (above today), not more than that.”

If true, this would suggest that prime rate – the basis for variable mortgage rates – will average just 4 to 4.25 per cent over the long term, a big departure from the roughly 5 per cent prime rate that most economists forecast as “normal.”

Saving ¾ of a percentage point, over the long-term, would have enormous impact on the finances of regular Canadians. Over five years alone, it would put $11,000 of interest back in people’s pockets on the average home purchase, with 20 per cent down. If you’re financially secure, that makes shorter-term and variable-rate mortgages worth a close look.

In an email with Mr. Tal about his call, he was careful to point out that “the new normal is a theoretical rate.”

“There is a big difference between the actual and theoretical rate,” he said. “In practice, rates tend to overshoot or undershoot. So it is possible that rates will rise by more than that, possibly to 3 per cent.”

Presumably, if his model is correct, rates would then revert back down to the mean and cycle around that 4.25 per cent prime rate number.

Regardless of how accurate Mr. Tal’s forecast proves to be, the odds are decent that the prime rate will remain almost two percentage points below its 6.89 per cent 30-year average. That’s in keeping with the Bay Street consensus. But more importantly, it’s reflective of Canada’s new realities: contained inflation and modest economic growth.

“Variable will probably do better in this environment…if you have a five-year time horizon.” But long-term interest rates will be “permanently higher” five years from now, Tal predicts.

The question is, what happens between now and the time that rates “normalize.”

Today you can find variable rates at prime – 0.5 per cent (i.e., 2.5 per cent) and five-year fixed rates at 3.49 per cent. Let’s assume that rates shoot up in 2015 as economists expect (an expectation that changes with the wind) and that they increase two percentage points over the two years that follow.

In the hypothetical scenario laid out above, those of you shopping for a mortgage may find extra value in two particular terms:

A three-year fixed mortgage: If you can find one in the 2.75 per cent range or better, it’s a compelling option. It gives you meaningful savings for three years (when compared to terms of four years or more). It also provides insulation from rate increases for three years. Compared to a five-year fixed mortgage, rates would have to be 2.25 percentage points higher at renewal for you to lose on this strategy. That assumes you make equal payments in all cases and renew into a two-year fixed (which adds up to five years total). Betting against a 225 basis point hike in three years is a wager that most strong borrowers should make.

A hybrid (50/50) mortgage: Despite our personal beliefs, rates are impossible to foretell with accuracy. A hybrid mortgage removes the guesswork, cuts your risk of rising rates in half and lets you participate in today’s low variable rates. This strategy involves putting 50 per cent of your mortgage in a five-year variable and 50 per cent in a five-year fixed, netting you a starting rate under 3 per cent. It also gives you more flexibility than a five-year fixed by letting you refinance early with a lower potential penalty, and letting you lock in the variable rate at any time.

Keep in mind, these strategies are primarily based on hypothetical interest cost. They’re also suited mainly to well-qualified borrowers with sound finances, stable employment and a five-year time horizon. Your situation may be different so as always, make sure to do your own research on what works best for you.

Robert McLister is the editor of CanadianMortgageTrends.com and a mortgage planner at VERICO intelliMortgage, a mortgage brokerage. You can also follow him on twitter at @CdnMortgageNews.