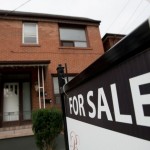 TTAWA — The Bank of Canada has made much of the threats to heavily indebted consumers, and the need not to get in over their heads even further — this despite yet more cuts in mortgage rates by commercial banks, fostered by the central bank itself in a weak economic-growth environment. Similar warnings have come from the federal government, which, through the Canada Mortgage and Housing Corp., has tightened lending rules a handful of times since the recession to encourage households to limit their borrowing risks, especially in a still-elevated real estate market. Some of the cajoling appears to have paid off, but only slightly, with the growth rate of household debt slowing — even as the level has crept up to a record household debt-to-income ratio of 162.6%. But there is another area of concern lurking in the shadows: non- or less-regulated lenders offering riskier loans to consumers, a measure of which is more difficult to quantify. The Bank of Canada has already raised the red flag on such lending practices. Related Canadian home sales drop 3.1% as ‘sense of panic’ sweeps western markets Canada’s oil capitals are headed for their first major housing correction since 2008, TD warns “Low interest rates may not only encourage some households to take on high levels of debt, but they may also encourage some financial entities to lend to riskier borrowers,” the bank said in its Financial System Review, published in December. Since then, policymakers have cut their key interest rate to 0.75% from the 1% level set in September 2010. That has led to commercial banks lowering their mortgage lending levels, as well. “The risk we are facing today is that increased regulations on major financial institutions, combined with even lower mortgage rates, may work to widen those shadowy margins,” CIBC World Markets economist Benjamin Tal said Wednesday. There are also concerns that the growing reliance on non-regulated, non-deposit taking institutions — those offering non-prime loans, in other words, above the going rates but with less favourable terms — will stretch consumers’ ability to meet their payments. “If you are a regulator, and you are imposing more and more regulations on those that are regulated, those financial institutions cannot do all the business that they want to do. So, if there’s something left on the table, and somebody else is taking advantage of that — and they’re not regulated,” Mr. Tal said in an interview. ‘To me, this is not a zero-sum game. In many ways, we might actually increase the risk profile in the market because more business is going to the unregulated part of the system.” At present, so-called non/less-regulated lenders represent nearly 5% of Canada’s mortgage market, according to the CIBC study. In Ontario, they account for just over 8% of all new mortgages. “But so far, it [non-prime lending] is not big enough to derail anything, but maybe it will grow,” Mr. Tal said.