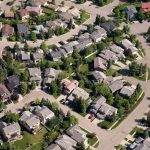 But Harper says Ottawa has no immediate plans to take action to cool it down, like it has in the past.

Responding to a question in Mississauga, Ont., he said debt-servicing costs are falling and default rates remain extremely low.

Harper made the remarks at a time when big banks and other lenders are cutting mortgage rates to kick off the spring real-estate season.

Related Spring mortgage market kicks off with a new low rate from Bank of Montreal — but you can do better That $1 million Toronto home just got even pricier They also come amid concerns Canadians have piled on too much debt and worries that housing markets in Toronto and Vancouver have become overheated.