Plunging oil prices have made it almost too difficult to predict what will happen in the Calgary housing market, according to a new real estate forecast.

As Vancouver home prices surge out of reach, businesses worry how to retain staff

Business groups are raising the alar 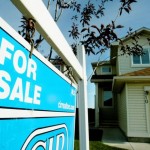 m about Vancouver’s ability to attract and retain the talent needed to foster local successes like retailer Lululemon Athletica or tech startups like video surveillance maker Avigilon Corp and social media manager Hootsuite. Keep reading. “Continued uncertainty in the oil market will impact Calgary real estate over $1 million, however, the degree of influence is still unknown. If employment and migration into the city remain at expected levels, sales are expected to remain on pace into early 2015,” said Sotheby’s International Realty Canada in a report on what it calls top-tier housing.

Ross McCredie, president and chief executive of Sotheby’s in Canada, says 2015 could continue to be a strong year for real estate if interest rates remain low. The Bank of Canada has not raised its overnight lending rate for more than four years.

Alberta is the one place where there is a lot of wait-and-see right now “There’s nothing that I’ve seen from any of the banks [indicating that the Bank of Canada is going to raise rates] and even if it went up one, two or three percentage points, that’s cheap money historically,” said Mr. McCredie. The prime rate at most financial institutions, which variable rate loans are tied to, is 3% and most consumers are able to negotiate discounts off that rate.

The exception to the Sotheby’s forecast might be Calgary where $1 million-plus sales were up 16% in 2014 from a year earlier. “Alberta is the one place where there is a lot of wait-and-see right now. This time last year no one saw this,” said Mr. McCredie, referring to the drop in oil prices. “For most of our clients, they’re upper end [and] they’ve really made a lot of money. There’s a lot of blue-eyed sheiks coming out of Alberta. They’ve diversified in their investments and you won’t see a panic.”

Related Sales of Canadian homes worth over $1M grew substantially last year and will again in 2015 Canadian housing bulls are joining real estate doubters as warnings and oil collapse sink in The Calgary Real Estate Board said last week that 2014 sales jumped 9.3% from a year earlier. The average sale price for the year was $483,079, a 5.8% increase from a year earlier.

Sotheby’s said Montreal’s high-end market has had a strong recovery because of a return to political stability. Sales of homes worth $1 million or more were up 21% in 2014 from 2013. “The whole sovereignty question is off the table now,” said Mr. McCredie.

The real estate company, which only looked at Montreal, Calgary, Toronto and Vancouver in the report, says Toronto should have the most momentum in the $1 million-plus category in 2015.