Canada will impose a “risk fee” starting Jan. 1 on mortgage insurance provided by the country’s housing agency to compensate taxpayers for potential losses in the housing market. 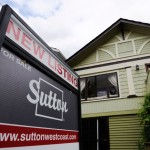 Canada Mortgage & Housing Corp. said the fee to the government will be “3.25% of premiums written and 10 basis points on new portfolio insurance written,” according to a financial report today for the three months ended Sept. 30.

“We certainly don’t expect it to have any impact on the availability or cost of mortgage funding,” CMHC chief financial officer Brian Naish said on a conference call with reporters today. “We don’t see it as a material event.”

The fee is the latest attempt by Finance Minister Jim Flaherty to rein in the agency amid concerns the nation’s housing market may be overvalued. The government-owned agency insures mortgages against default, and its insurance is fully backed by the federal government. By law, Canadian mortgages that have less than a 20% downpayment must be insured.

Private-sector mortgage insurers already pay a levy of 2.25% on their premiums, said Stephanie Rubec, a spokeswoman for the federal finance department. The government set the CMHC fee higher, at 3.25%, because it guarantees 100% of CMHC insurance, compared with only 90% backing for private insurers, she said.

“The fees compensate the government for risks stemming from its guarantee of mortgage insurance,” she said in an e- mail. “This measure supports the government’s continuous efforts to reinforce the housing finance framework.”

The move may raise mortgage rates by as many as 10 basis points, or 0.10 percentage points, an increase that probably won’t have a major impact on housing demand, said National Bank Financial analyst Peter Routledge.

Portfolio insurance refers to coverage on mortgages with a downpayment greater than 20%. Financial institutions often buy such insurance in bulk so they can repackage home loans as securities for investors.

Under a law governing the agency, the government has the authority to impose fees to “compensate for exposure,” Naish said, adding the fee will result in an annual payment to the government of about $50-million per year.

The agency is reviewing the impact of the fee on the portfolio insurance it offers to lenders, he said.

CMHC had $560-billion in outstanding mortgage insurance at the end of September, down 6.3% from the end of last year, it said today in its quarterly report.