Over 40% of first-time home buyers in Canada can’t afford a house without their parents’ help, report suggests 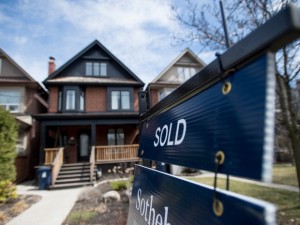 TORONTO — A Bank of Montreal report suggests first-time home buyers are increasingly turning to the “Bank of Mom and Dad.”

Move over Stephen Poloz, here’s the real reason mortgage rates are so low in Canada

Go figure — Canada’s overheated housing market is getting the biggest shot of juice from the efforts of a central bank thousands of miles away. Here’s how it works BMO’s 2015 Home Buying Report found that 42 per cent of first-time buyers told an online survey that they expected their parents or relatives to help pay for their first home.

That’s up 12 per cent from last year’s report.

The bank also said 40 per cent of the first-time buyers said they couldn’t afford a home without financial help from family.

The study found the first-timers were anticipating a downpayment of about $59,413 on average and had a budget of $312,700 for the purchase — slightly less than last year’s average price of $316,100.

Related Home buying frenzy defies Bank of Canada’s view of soft landing Low oil convinces people to stay put in B.C., boosting housing Canada’s mortgage wars hit new low as fixed rate dips to 1.49% The bank also found that 42 per cent of current home-owners surveyed said they were looking for family help with the purchase. Their average budget was $473,000 and their average downpayment was $123,214.

The BMO report is based on online interviews with a random sample of 2,007 people aged 18 years or more between Feb. 24 and March 5.

Prices in Canada have been rising since 2009, resisting regulators’ efforts to cool the market by restricting credit. In Toronto and Vancouver, values have surged as much as 56 per cent in six years. Now as the European Central Bank’s bond buying helps drive down rates to near-record lows in Canada, the housing market is poised to ascend even higher.

Re/Max, the country’s largest residential real estate agency, raised its forecast for home price growth to 3 per cent from 2.5 per cent last week because transactions and values were so high in the first three months of this year. In March, housing sales rallied 4.1 per cent, the most in 10 months.

Toronto home sales increased 11 per cent to more than 8,000 transactions in March over the prior year, according to the Canadian Real Estate Association. Prices in the country’s most populous city jumped 10 per cent to about $601,500.

In Vancouver, Canada’s most expensive home market, sales soared 53 per cent and the average cost to buy a home rose 11 per cent to $870,000.