Pockets of risk in Canada’s condo market but don’t expect a crash, Conference Board report says 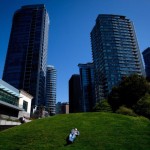 Pockets of risk continue to exist in the condominium markets of Toronto and Vancouver, but a broad-based downturn is unlikely, according to the latest Conference Board of Canada condo report commissioned by Genworth Canada.

Genworth is the largest private mortgage insurer in Canada.

Toronto’s condo market is expected to “cool slightly but avoid the collapse many fear due to healthy population growth, a solid economy and the desirability of downtown living,” the report says.

Vancouver’s condominium market is recovering along with the overall resale market, although slowing offshore demand “threatens to expose to area’s poor housing affordability.”

Increases in average household incomes, for example, would help to keep mortgage costs affordable despite expected modest price gains over the next two years in all eight cities studied in the report.

“Continued growth in immigration, affordability pressures in major cities, and aging baby-boomers looking to downsize are all factors that support continued demand for condominiums in urban centres,” Genworth said in a statement.