The national average home price rose in October but the impact of Canada’s two largest markets is continuing to influence Canada-wide numbers, according to the Canadian Real Estate Association. 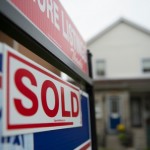 ver home prices pass Rome and close in on Paris

Canada’s two priciest cities for homes can now be included in an international class that is attracting foreign investors from around the world, says a new real estate study. Find out more Across the countries prices were up 7.1% from a year ago to an average of $419,699. Once Toronto and Vancouver are removed, the annual gain slips to 5.4% and the average sale price for October drops to $330,596.

“Low interest rates continued to support sales in some of Canada’s more active and expensive urban housing markets and factored into the monthly increase for national sales,” said Beth Crosbie., president of CREA, in a statement. “Even so, sales did not increase in many local markets in Canada, which shows that national and local housing market trends can be very different.”

For the sixth straight month sales rose and last month proved to be the strongest for October since 2009.

Related One way to lose money even when you’ve made 5000% on your home Toronto housing market still on fire, adding heat to national debate Calgary’s condo market booming as average price for single-family homes tops half a million “While the strength of national sales activity is far from being a Canada-wide phenomenon, it extends beyond Vancouver, Calgary and Toronto,” said Gregory Klump, chief economist with CREA. “Sales in a number of B.C. markets have started to recover from weaker demand over the past couple of years. They have also been improving across much of Alberta, where interprovincial migration and international immigration are reaching new heights.”

Actual October sales were up 7% from a year and sales were up 70% of all local markets, led by Greater Vancouver and the Fraser Valley, Victoria, Calgary, and Greater Toronto. Those five markets combined for 40% of the national sales activity.