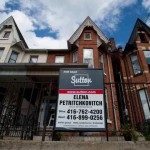 Canadians are the most optimistic about the country’s real estate market in a more than six years as prices reignite.

Allegations of Bank of China money-laundering has uncovered a scheme to sidestep currency restrictions that is fuelling property booms in Canada, U.S. and Australia. Find out more

The share of Canadians predicting higher home prices over the next six months rose to 47% last week, according to polling by Bloomberg and Nanos Research Group, the highest level since the survey began in 2008. That figure has risen 10 percentage points since April.

Get the latest data on Canada’s housing market

The data suggest Canadians are brushing off forecasts of a slowdown in a market some analysts have warned is unsustainable. Home prices rose 8.1% through the first five months of the year, according to the Canadian Real Estate Association, compared with a 1.3% gain over the same period in 2013, and prices may be poised for further gains if expectations for rising home values continue to whet demand.

The behavior of buyers today would be “completely ridiculous, unless there’s an implicit assumption that there’s going to be capital gains involved, and that’s a mentality that you see in these long upswings in prices,” Ben Rabidoux, president of North Cove Advisors Inc., a research firm that specializes in housing, said in a phone interview last week.

The survey, part of polling for the Bloomberg Nanos Canadian Confidence Index, is based on phone interviews with 1,000 people, using a four-week rolling average of 250 respondents. The results are accurate to within 3.1 percentage points, 19 times out of 20. The share of Canadians who expect a drop in real estate prices was 11.6%. At 35.4 percentage points, the difference between optimists and pessimists is the widest since 2009.

The Bloomberg Nanos Canadian Confidence Index — derived from survey questions on real estate, job security, personal finances and the economic outlook — rose to the highest in more than four years led by stronger expectations for housing, gaining to 60.5 in the week ended July 11.

The housing market is rebounding from a lull this winter that saw colder-than-usual temperatures put a temporary chill on construction activity and home sales. Buyers are also taking advantage of historically low borrowing costs, with the Bank of Canada over the past year downplaying the likelihood of interest rate increases and lenders this spring lowering five-year fixed mortgage rates to below three%.

Regulatory efforts, meanwhile, to keep overly indebted borrowers out of the market have failed to quell gains. A government decision in 2012 to tighten qualification requirements for mortgages led to a temporary slowdown later that year, only to see the market recover in 2013.

Investors have noticed. Canadian lenders, which hold more than C$1 trillion worth of mortgages, have been among the world’s best performers since the middle of 2013. The Standard & Poor’s/TSX Composite Banks Industry Group Index has gained about 22% in U.S.-dollar terms since June 3, 2013, compared with about 5% for the Bloomberg World Banks Index.

Canada’s six largest banks are among the top 10 stock performers among North American banks over the past year, led by Toronto-Dominion Bank’s 30% gain.

The surge in prices, coupled with household debt levels near record highs, has prompted analysts including Dan Werner, an equity analyst at Morningstar Inc., to warn of a retreat.

Within the next five years a correction in Canada is “almost inevitable,” Werner said in a note to investors this month. Prices could fall 25% to 30%, he said.

Even at the Bank of Canada, where policy makers have said they see signs that household debt is stabilizing, the issue is still seen as the biggest risk to the Canadian economy.

Outside of a few small corrections, Canadian home prices have been on a steady ascent more than 15 years. They are up 77% over the past 10 years, according to the Teranet-National Bank Home Price Index, roughly 10 times the pace of U.S. housing, according to the seasonally adjusted S&P/Case- Shiller composite-20 home price index.
Bloomberg.com