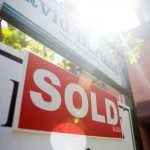 A signal from the Bank of Canada that it is not raising its key lending rate any time soon, coupled with the likelihood of falling mortgage rates, could be enough to keep the latest housing rally going.

There’s been a sea change at the Bank of Canada. For the first time in more than a year, policymakers have dropped any reference to rates eventually rising

There have been signs the housing market is in recovery mode with year-over-year sales rising in many markets, albeit generally below 10-year averages. Analysts have called it a short-term blip caused by consumers rushing to buy to  take advantage of pre-approved mortgages signed 120 days ago when long-term rates were lower.

But with the Bank of Canada signaling Wednesday it won’t be raising rates — its neutral stance could even mean lower rates — consumers can safely slide back into variable mortgages tied to prime which tracks the central bank rate.

The short-term rate option and the possibility long-term rates will follow has people worried the market may be recovering too fast for the taste of Ottawa, leaving Finance Minister Jim Flaherty with no choice but to tighten lending rules again.

“It’s possible interest rates will go down,” said CIBC deputy chief economist Benjamin Tal, adding there’s a huge amount of mortgage debt already in the pipeline that was created when people took advantage of rates they were pre-approved for in the summer. “I’ve seen what is in the pipeline in mortgage activity and you won’t believe the numbers when it is official.”

With no panic to buy, the question is whether people will be encouraged to continue to take on more debt or slow down their spending if the economy slows?