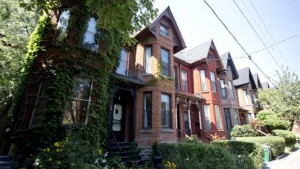 In some cases, homeowners can actually save money by breaking a mortgage with a year left on the contract.
(Gloria Nieto/The Globe and Mail)

The era of pleasant surprises for people renewing their mortgages is over.

After five years of trending lower, mortgage rates have reversed course and started to rise. Aspiring first-time home buyers are being priced out of the market by these increases, but at least they’ve avoided a costly mortgage entanglement. Existing homeowners may simply have to pay more.

Current fixed rates are still lower than they were five years ago, but it’s a different story with the once-popular variable rate mortgage. Veteran mortgage broker Vince Gaetano ofMonsterMortgage.ca says he has clients coming in with maturing variable-rate mortgages at 2.1 or 2.2 per cent, an all-time great deal. “They know their cash flow is going to get crunched,” he said.

A variable-rate mortgage goes for 2.6 per cent with a good discount these days, while a fully discounted five-year fixed rate mortgage rate has risen to 3.49 per cent from 2.89 per cent a few months back. Over the decades you own a house, you’ll win some at mortgage renewal time and you’ll lose some. We’ve had quite the winning streak in recent years for people renewing at lower rates, but now it’s coming to an end.

In the years ahead, the biggest financial mistake you make just might be failing to think well in advance about a mortgage coming up for renewal. You have options: Your lender may let you renew early (within 90 days) into a new five-year term, or you may be able to do a “blend and extend.” That’s where you convert the remains of your existing fixed-rate mortgage into a new loan with a blended interest rate. We’ll look at a more aggressive strategy suggested by Mr. Gaetano in a minute.

But the issue is not whether you can afford higher mortgage payments. Rather, it’s what you’ll have to sacrifice to make them. Mr. Dunning’s take: “Discretionary spending disappears. A lot of that is in the service sector – people going to coffee shops and restaurants.”

With the need for future sacrifices in mind, let’s look at a strategy suggested by Mr. Gaetano for lessening the impact of renewing a big mortgage at a higher rate. The plan: Break your existing mortgage a few months before the renewal date and refinance at current rates so you avoid higher costs in the future.

Let’s say your mortgage is coming up for renewal in six months, which leaves plenty of time for more rate increases. Start by getting a commitment from your lender to hold today’s best discounted five-year fixed mortgage rate for 120 days. Then, wait until two to three months before renewal to break the mortgage.

Yes, there will be penalties. But by waiting until just a few months before the renewal date, you’ll minimize them. It’s also important to understand that rising rates may actually reduce your penalty.

Penalties on fixed-rate mortgages are usually equivalent to the higher of three months’ worth of interest (Mr. Gaetano said two months’ interest would be charged if you had only two months to go) or a calculation called the interest rate differential, or IRD. Among the factors that go into the IRD are the rate on your existing mortgage and the rate the lender can get today. If rates are rising, then your IRD should decline.

Mr. Gaetano said an additional $1,000 or so in legal fees would apply if you broke your mortgage and took it to another lender. Even so, he thinks borrowers will end up saving money if the balance on their mortgage is more than $200,000 to $250,000 and the difference between the rate on hold for them and market rates is roughly 0.4 of a percentage point or more.