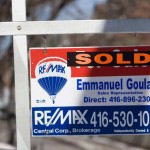 Home sales and prices are expected to still grow over the next two years, albeit at a slower pace, says the national organization that represents realtors.

From four bedrooms in Windsor to one-bedroom in Vancouver, check out how far $500,000 goes in 8 major markets across Canada. Read on

CREA said a particularly tough winter and the fact consumers pushed purchases forward into the summer of 2013 to take advantage of low rate pre-approved mortgages may have contributed to sluggish sales to start off 2014.

But the group, which represents about 100 boards across the country, says the market should bounce back with mortgage rates heading down.

“I expect fixed mortgage rates will edge marginally higher in the second half of 2014 as evidence confirms an anticipated pick-up in economic growth,” said Gregory Klump, chief economist with CREA, in a statement. “Marginally higher mortgage rates are likely to counterbalance that lift provided by stronger economic and continuing job growth and restrain the momentum of sales activity.”

Meanwhile, CREA also released results for February sales which were up 0.3% from a January. The increase ended five straight months of declines but sales are still off 9.3% from the peak.

“Sales in February rebounded in some of the smaller local markets where activity was impacted by harsh winter weather in January,” said Laura Leyser, president of CREA, in a release.

Actual not seasonally adjusted sales were up 1.9% in February from a year ago with most of the gain coming from increased sales in British Columbia’s lower mainland and to some extent Calgary.

The average home sold for $406,372 in February which was a 10.1% increase from a year ago. CREA emphasized the year-over-year gain was impacted by the lack of activity in some of the country’s most expensive markets in 2013, in particular Vancouver.
twitter.com/dustywallet