Buyers of new homes should do their homework and be wary of builders who promise too much, says the man overseeing Ontario‘s regulator for home builders. 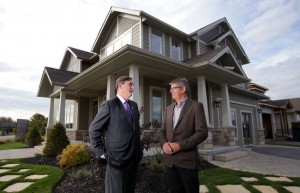 Tarion president and chief executive officer Howard Bogach is touring the province to promote the corporation’s work and warn of illegal building practices. The Ontario government created Tarion Warranty Corp. in 1976 to regulate the building of new homes. It licences builders of new homes and condominiums and guarantees warranties.

Registered builders must have the technical competence and enough financing to allow them to absorb any losses that could arise during a home’s construction.

Bogach said buyers should “make the phone call” to learn if the builder‘s registered. Its website at www.tarion.com also has a directory of registered builders.

Customers should ask questions and not be swayed solely by the good looks of model homes, he said.

“On average, 18 per cent of the claims we pay out are related to illegal building — about $1 million a year,” Bogach said.

Builders ought to know the new demands of the business, from science to laws to marketing, he said. Such courses would ensure they do.

It’s more regulation — something against which local builders have fought — but Den Ouden, a Belleville-based builder, said there are good reason for it: quality control for the industry and protection for buyers.

Bogach said no new registration criteria would be ready before late 2014.

Red flags
Tarion Warranty Corp. is a private, non-profit corporation responsible for regulating the home-building industry in Ontario.
Under Ontario law, a builder who isn’t registered with Tarion Warranty Corp. can’t sign a sale or  construction agreement with a buyer.

Tarion warns buyers to be wary if a builder says: