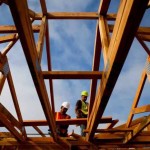 Is Canada’s market overheated? Here’s a look at the prices in the top markets across North America. The results may surprise you

The value of residential building permits granted by municipalities jumped 26.3% to $4.60 billion ($4.18 billion), Statistics Canada said Thursday from Ottawa. One of the largest municipal gains was led by multiple-unit housing in Vancouver, a market that policy makers have said is most at risk from overbuilding.

Non-residential permits fell 14.6% to $2.39 billion in January, reducing the gain in total building permits to $6.99 billion, a rise of 8.5%. Economists forecast total permits would climb 1.7%, according to the median of the nine responses to a Bloomberg survey.

Vancouver building permits rose 30.5% in January to $627 million. It was one of the largest gains by city, along with Toronto and the Alberta capital of Edmonton, Statistics Canada said in its report.

Pacific Investment Management Co. forecasts Canadian home prices may fall as much as 20% in the next five years.

“Canadian housing is overvalued,” Ed Devlin, the London- based head of Pimco’s Canadian portfolio, said by telephone March 3. “I would expect to see it happening at the end of this year, we’re going to start to see housing roll over.”

Pimco has been reducing its holdings of Canadian debt after a run of strong profits, Devlin said. The housing decline will lead to a pullback in consumer spending, capping economic growth this year in Canada around 2%, he said.