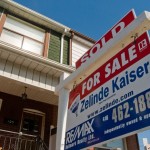 The share of Canadians who are predicting higher home prices in their neighborhood remained above 40% for a fifth week in the latest weekly polling by Bloomberg and Nanos Research. That’s kept consumer confidence levels at near the highest in four years, the data show.

Improving views on housing follow a recent acceleration in the real estate market in recent months that reflects a shift by policy makers at the Bank of Canada to dim expectations for rate increases as it plays down concerns over rising household debt to focus on stimulating the economy.

“The crux of it is the rates environment,” said David Tulk, chief macro strategist at TD Securities. “It’s that combined impact of seeing your own asset increase but also realizing that no one is going to take away the punch bowl.”

The Bloomberg Nanos Confidence Index measured 59.6 in the week ended May 16, little changed from the previous reading of 59.5. The survey-based index hit a four-year high of 60.1 on April 25. The index is calculated on scores derived from weekly polls on the outlook for real estate prices, personal finances, job security and the Canadian economy.

The proportion of survey respondents who believe home values in their neighborhood will rise over the next six months was at 40.7% last week. While down from 42.8% two weeks ago, the score has averaged 41.9% over the past five weeks, up from an average 37.3% over the past year. The share of Canadians who expect a decrease in real estate prices fell to 9.7% last week, the lowest since January.

The Nanos data are based on phone interviews with 1,000 people, using a four-week rolling average of 250 respondents. The results are accurate to within 3.1 percentage points.

Last week’s poll coincided with Canadian Real Estate Association data that showed home sales in April rose 2.7%, the fastest pace since August, largely on a surge in transactions in Vancouver and Toronto. April’s sales gain was the third consecutive increase after a four-month winter skid.

The national average price of a home sold in April was up 0.8% from March and 7.6% from a year earlier. There is also evidence construction is holding up better than expected; Canada’s housing agency reported this month work on new homes accelerated to 194,809 units at a adjusted annual pace in April, a 24% increase from the previous month.

Canadian inflation hasn’t exceeded the central bank’s 2% target since February 2012. Statistics Canada will report April inflation data on May 23. Economists are forecasting a 2% pace for the first time in two years.

The impact of the Bank of Canada’s policy shift has prompted commercial banks to lower mortgage rates, even as the federal government and other financial regulators have tightened mortgage rules to shield households that would be most vulnerable to a home-price correction.

Canada Mortgage & Housing Agency this year restricted the availability of mortgage insurance for individuals purchasing a second home and increased premiums on its products. The federal government has recently shortened the maximum amortization period on mortgages.

The regulations “are not targeting the average homeowner, they are trying to limit the most vulnerable of borrowers of entering a fairly stretched market,” said Tulk.

Economists surveyed by Bloomberg News forecast the 1% overnight policy rate won’t rise before the middle of 2015 at the earliest. Poloz reiterated last month he is neutral on the direction of the next move.

Bloomberg Nanos’s confidence index has two sub-indexes: the Expectations Index, based on responses on the outlook for the economy and real-estate prices, and the Pocketbook Index, based on survey responses to questions about personal finances and job security. The Pocketbook Index rose to 60.2 last week from 59.2, while the Expectations Index fell to 59 from 59.7.

Both gauges are above their 12 month averages.