TORONTO — Sales of homes worth over $1 million increased in four major Canadian real estate markets last year, according to a report released by Sotheby’s International Realty on Wednesday. 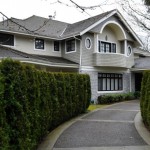 sales growth of 38 per cent, while sales of Vancouver’s high-end homes rose by 25 per cent from the previous year.

Canadians who last year brushed off predictions of a real estate slowdown and kept buying houses are increasingly joining the doubters.

The nation’s households are the least optimistic since May 2013 that home prices will keep rising, according to weekly polling data compiled by Nanos Research for Bloomberg. Keep reading. Growing demand and limited supply cut down the number of days that homes stayed on the market and increased the percentage of homes in both markets that sold over the asking price, the report said. Sales grew by a “more modest” 16 per cent in Calgary and 21 per cent in Montreal, according to the study.

That trend is expected to continue into 2015, with demand to outstrip supply in the Greater Toronto Area and in Vancouver. Meanwhile, the high-end real estate markets in Montreal and Calgary are expected to be balanced, according to the Sotheby’s analysis.

The report notes that oil prices, which have fallen by 55 per cent since the summer due to a supply glut, could have an impact on sales of high-end homes in Calgary.

“We’re really watching Calgary very closely,” Sotheby’s president and chief executive Ross McCredie said in an interview. “There’s fear out there in terms of what 2015 is going to look like if oil stays where it is today.”

So far, the number of homes being sold has continued to grow in Calgary’s high-end real estate market. McCredie said while buyers may begin holding off to get a sense of where oil prices are headed, it’s unlikely that Calgary’s real estate market will go flat.

Related As Vancouver home prices surge out of reach, businesses worry how to retain staff Houses might not be as overvalued as the Bank of Canada thinks, Moody’s report suggests “Definitely in the later part of last year you saw a lot of people waiting,” he said. “A lot of transactions didn’t end up closing or deals fell apart. I think they’re all just taking a cautious look at it.”

If oil remains below $50 a barrel, that could spell trouble for Alberta’s real estate sector in general, including in the high-end segment, McCredie said.

“Six months later, if oil’s still at $50 or less, I think you’re going to start to see some really concerned people there,” he said.

McCredie also said that foreign investors are snatching up roughly half of the homes worth $5 million or more in Vancouver and Toronto, despite a recent report from Canada Mortgage and Housing Corp. that puts the foreign ownership numbers much lower.

The CHMC report last month found that foreigners own only 2.4 per cent of the condos for rent in Toronto and 2.3 per cent in Vancouver.

While the CHMC report noted that some areas of Vancouver and Toronto had a higher proportion of foreign condo owners — as high as 5.8 per cent in parts of Vancouver and 4.3 per cent in Toronto’s centre core — it’s still much lower than the estimated 50 per cent foreign ownership that McCredie says exists in the luxury real estate market in those two cities.

“It’s not an exact science,” McCredie said. “It’s not like you can literally say, ‘Well there’s X number,’ because what we see a lot is the transaction for foreigners buying Canadian real estate happens through Canadian subcompanies.”

Since many of the sales take place through Canadian companies owned by foreign individuals or corporations, those transactions wouldn’t be captured in the CMHC data, McCredie said. Sotheby’s, which markets and brokers the sales of luxury homes, is in a better position to gauge the level of foreign ownership, at least in the over $1 million market.

Some critics have raised concerns that a mass selloff of foreign-owned properties could crash Canada’s real estate market in an economic downturn.

“They’ve got a lot of money right now. They see Canada as a very stable marketplace. They like the story around Canada. They like coming here. They have friends and family here.”