Say Goodbye To Forward Guidance From The Bank Of Canada 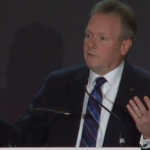 Bank of Canada Governor Stephen Poloz is signalling that it’s time to take off the training wheels; that the central bank will no longer be there to hold the market’s hand.

In more technical terms, the governor announced that the Bank would no longer be providing forward guidance – essentially, a paragraph, sentence, or phrase in its policy statement that provides an indication of which way the overnight rate is likely to go, how long it might stay at a given level, or what might cause it to change.

Poloz made this declaration in a discussion paper on Friday and reiterated this shift in comments to the press.

(As an aside, the governor noted that a working version of this paper had been presented at the Moneco-Econtro Summer Conference in Kingston – his private speech. However, attendees confirmed that Poloz did not provide a hint that he was on the verge of removing forward guidance at that point in time.)

However, the governor made the case that there’s a downside to making a commitment of this nature: that traders will make one-way, levered bets based on the central bank’s stance. When a central bank appears to be on the verge of shifting its forward guidance, this can cause volatility to surge. “The volatility of a return to two-way trading is the future price of successful forward guidance today,” Poloz wrote.

Moreover, it’s difficult for monetary policymakers to provide credible forward guidance when their models aren’t doing a fabulous job of capturing  and forecasting post-recession realities. Guidance is inherently linked to the central bank’s view of how economic events will unfold – an outlook that has been, in the Bank of Canada’s case, riddled with uncertainty.

According to Poloz, forward guidance should be “reserved primarily for use at the zero lower bound, as a form of additional insurance that the economy will return to equilibrium.”

One could argue that the Bank of Canada already de facto removed forward guidance (at least partially) when the tightening bias was eliminated in October 2013 and replaced it with a data-dependent neutral bias. So this move could be described as:

The governor admitted as much in his discussion paper. “Our experience…dropping the previously announced tightening bias, suggests that offering instead full transparency on the risks that the central bank is weighing causes the market to assess new information more or less as the central bank does; and because every data point can give rise to a debate between economists, the market remains two-way and less vulnerable to unusual leveraging and volatile shifts in sentiment,” he wrote.

So practically speaking, this changes nothing for the time being.

The only difference – and it’s a big one – is the market won’t get a signal from the Bank of Canada once a rate hike is back on the table – participants will have to figure out how the data flow is affecting the central bank’s stance.

While the governor seems to think that this will lead to less parsing of its policy statements, per Randall Palmer ofReuters, one could also make the case the opposite will occur. Instead of looking for tiny tweaks in one part of the statement, market participants will now likely pick through the entire statement with a fine-toothed comb to glean whether a rate hike is coming sooner or later than they anticipated. For example: The Bank is now saying that underlying inflation is now “slightly below target” rather than just “below target” – does that mean a rate hike is coming in April instead of July?

Of course, this extreme parsing already happens, and regardless of whether the Bank’s language is examined more or less closely than before, the end result is the same. As Poloz put it, ending forward guidance shifts “some of the policy uncertainty from the central bank’s plate back onto the market’s place.”

There’s one key unanswered question about the latest evolution of Bank of Canada policy: why now? The Canadian economy is still far away from home; why not wait until, say, the output gap has closed or rates are up to the ‘new neutral’ level to make this change?

Well, Stephen Poloz has prided himself on being an ‘honest’ central banker – even though some of his statements on currency fluctuations could be kindly characterized as misleading.

Perhaps, two weeks away from an interest rate decision and Monetary Policy Report, the Bank of Canada could no longer honestly say that a rate cut is just as likely as a hike.

Rather than admit that the chances of a  rate cut were going from slim to nil as the domestic data flow improved and American economy began to pick up steam, the governor has artfully avoided making what would be construed as a hawkish shift by choosing to say nothing whatsoever on that subject.