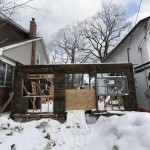 More money was spent renovating homes in Canada than building new ones during the 12 months to the end of June, according to data compiled by the Bank of Montreal.

“In the four quarters through [the second quarter], renovation activity outpaced investment in new residential construction $48.4-billion to $46.3-billion, as the latter has rolled over recently,” BMO economist Robert Kavcic pointed out in a recent research note. “Indeed, while new construction spending was down in recent quarters, renovation spending accelerated to a 6.9 per cent year-over-year clip in Q2.”

That fits recent findings from Canadian Imperial Bank of Commerce economist Benjamin Tal. He noticed that prices of higher-priced homes are rising faster than prices of lower-priced homes in cities such as Toronto, Ottawa, Calgary and Edmonton. That’s making it harder for homeowners to trade up to a bigger or better home. “Regardless of what your starting point is, and by how much your property has appreciated, the desired move up target is getting further and further out of reach,” Mr. Tal wrote in a research note last month.

So homeowners are increasingly choosing to renovate. “Over the past five years, spending on home renovations as a share of total residential investment averaged close to 46 per cent – by far the largest share on record,” Mr. Tal wrote.

The increasing inability to trade up is not the only factor that economists foresee weighing on the number of homes changing hands. “An aging population – the proportion of Canadians aged 65 and over is expected to climb from 15 per cent in 2013 to 23 per cent by 2030 – will reduce housing turnover, and the volume of listings and sales transactions,” Bank of Nova Scotia economist Adrienne Warren wrote in a research note Thursday. “The likelihood of moving in any given year declines progressively with age. Between 2006 and 2011, only 11 per cent of homeowners aged 65 and over changed residences, compared with 34 per cent of all other homeowners.”

With a larger elderly population staying put in their homes, and a rising proportion of homeowners unable to trade up, demand for renovation work could stay strong.

Ms. Warren estimates that annual growth in the number of Canadian households should remain relatively high around 180,000 to the end of the decade, before gradually declining to around 150,000 by 2030.

“By 2020, the bulk of the relatively large baby echo generation will have formed independent households, while the share of the population 75 and over begins to climb more rapidly,” she wrote. “This level of household formation is consistent with a sustainable annual pace of housing starts, including replacement demand, of around 155,000 in 2030, down from around 185,000 today.”

But Ms. Warren added that even with the slowdown in household formation, Canada’s total housing stock (both rental units and those for owner-occupiers) will have to expand by more than 2.5 million units between now and 2030 to meet the needs of the population.

So, while renovations will likely remain strong, new home construction will still be a force in the economy.