TORONTO — Rock-bottom interest rates, a scarcity of supply and growing demand from millennials and wealthy immigrants have fuelled a strong start to the spring real estate season in Toronto and Vancouver.

“Spring has come early for both Toronto and Vancouver,” said Sal Guatieri, a senior economist at BMO Capital Markets. 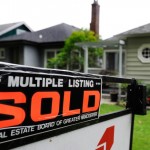 Both cities experienced growth in sales volumes and prices during the first two months of the year, Guatieri said.

“I would expect the spring market to be quite hot in both cities — but that will be the exception across the country, not the norm.”

Related Calgary housing starts plunge by 40% in February as construction activity slows Point Grey mansion gets $51.8M: How Vancouver’s most exclusive real estate is drawing Chinese buyers The real cost of a $1 million home: Toronto buyers resort to sub-prime loans as prices soar In Toronto, February home sales grew by 11% from a year ago while prices jumped nearly 8%, according to statistics from the Toronto Real Estate Board. That’s despite the fact that it was one of the coldest Februaries on record for the city.

“You would think this year, with the extreme cold, that there would have been an extreme cooling, but that really didn’t happen. The amount of demand just continues to increase.”

The number of active listings — which indicates the supply of homes for sale — at the end February dropped by 8.7% from a year ago, leading to heightened competition between buyers.

In Vancouver, home sales were up 21% in February compared to a year ago, while prices rose by 6.4%. The average price of a detached home — an increasingly rare commodity in space-constricted urban centres — tipped over the $1 million mark in both cities this year.

Meanwhile, the spring outlook for other markets across the country is less rosy. Alberta and Newfoundland are likely to see their real estate markets continue to soften due to the impact of lower oil prices on their economies, Guatieri said.

“We do think oil prices will steady later this year, but the next few months could be a bit rough for the housing markets in those regions,” Guatieri said.

He noted that “even high-flying Saskatchewan has lost a lot of steam recently,” with home prices in Regina and Saskatoon, which had been rising rapidly, beginning to fall.

Real estate markets in Quebec and Atlantic Canada, which have cooled considerably, are expected to be remain relatively stable, Guatieri said.

“Those markets have been cool for some time now. Demand has been weak … Listings have shot higher. Prices are either very steady or, in many cases, falling modestly. I don’t see signs of a turnaround.”

Despite the flood of buyers into the Toronto and Vancouver markets, mortgage expert Rob McLister says the banks have not been as aggressive in trying to woo customers with mortgage rate discounts as in previous years.

“When it comes to mortgage rate promotions, it’s been whisper quiet compared to the last few Februaries and Marches,” said McLister, who is the founder of RateSpy.com.

In addition to trying to maintain their profit margins, McLister says the banks are wary of drawing the ire of policy-makers, “many of whom don’t want flashy rate wars to further stoke demand in Canada’s overheated housing regions.”