TORONTO — Canadian home prices jumped in May from April as a spring rebound in real estate continued in most cities, offsetting a couple of weak markets, the Teranet-National Bank Composite House Price Index showed on Wednesday. 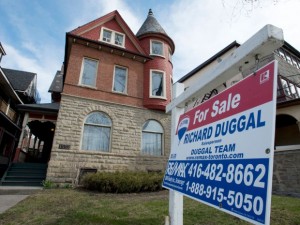 New housing already purchased and in the pipeline continues to propel the Canadian real estate market but worries persist about what happens when that tap turns off. Read more

The index, which measures price changes for repeat sales of single-family homes, showed overall prices rose 1.1% in May, the ninth time in 15 years that May prices were up 1.0% or more from April.

The index was up 2.0% from a year earlier, which matched the April rate and marked the smallest 12-month gain since November 2009.

The report suggested Canada’s housing market regained strength in the spring after a long slow winter of decline following the government’s move to tighten mortgage lending rules in July 2012.

Residential real estate activity typically picks up in the spring, and economists have been waiting to see if demand will return after a dramatic slowdown since the middle of 2012.

The report echoed one released on Monday by the Canada Mortgage and Housing Corp that showed housing starts jumped much more than expected in May from April, suggesting residential construction may contribute to Canadian economic growth in the second quarter.

They were flat in Halifax and down 0.8% in Victoria.

Year-on-year prices dropped in two cities — Victoria, where they were down 4.1% from May 2012, and Vancouver, where prices fell 3.2%. British Columbia had the hottest housing market going into the downturn.