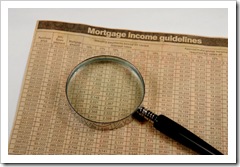 If you’re a typical borrower, yourdebt ratios will largely determine if you’re approved for a mortgage.

For applicants who push the limits of qualification, those approvals have been tougher to come by. That’s a direct result of last year’s mortgage rule tightening, which imposed stricter debt ratio calculations (among other things).

And by year-end, those calculations will get even more conservative.

“Under current practice, CMHC stipulates standard formulas for calculation of debt service ratios but has not been specific as to how each key input is to be treated,” says CMHC spokesman Charles Sauriol.

These new guidelines will clarify that, and they become effective on CMHC-insured mortgages on December 31, 2013. (In practice, many lenders already apply them.)

These standards will apply to all insured 1-4 unit residential mortgages, regardless of the loan-to-valueratio. Uninsured (conventional) mortgages are allowed different policies, but most lenders will use the same rules for all their approvals.

Here are some of CMHC’s newly mintedinsured mortgage “clarifications”:

Compared to past methods (which entailed flat heating costs, like $100/month), the new guidelines can double or triple the heating cost that must be factored into debt ratios on larger properties, and reduce it on smaller ones.

It’s important to repeat that most of these policies are already being followed by most lenders. But there are exceptions.

Those exception-case lenders are commonly viewed as go-to sources when borrowers have tight debt ratios. These new guidelines are designed to minimize those “loopholes.”

All of this has come about, in part, because of Ottawa’s rule changes last July. At that time, the government fixed the maximum Gross Debt Service and Total Debt Service ratios for insured mortgages at 39% and 44% respectively.

Sauriol says that change “reinforces the importance for CMHC to ensure that debt service ratios provide the same measure of a specific borrower’s ability to service the mortgage debt, regardless of the lender submitting the application to CMHC for insurance.”