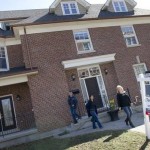 Ontario’s real estate association has launched an ad campaign to explain why they believe land transfer taxes hurt the economy. But in a hot housing market, could the tax be used to cool particular regions, such as Toronto and Vancouver?

Officials in Ottawa have made it clear they see no need to cool the market right now. Prime Minister Stephen Harper said Wednesday that he doesn’t anticipate a housing crisis in Canada, although he says a small percentage of Canadians are overextended and vulnerable to rate hikes.

But federal officials are exploring their options in case they change their minds. Canada Mortgage and Housing Corp. chief executive officer Evan Siddall noted Friday that CMHC has been evaluating further rule changes that it could recommend if house price growth remains strong or picks up.

Former Finance Minister Jim Flaherty tightened the rules that determine which mortgages are eligible for insurance four times, beginning in 2008, in an effort to ease the market. He also took a number of other steps, along with both the banking regulator and CMHC, to achieve that goal.

There are still a wide range of things Ottawa could do, including raising minimum down payments. But one thing has increasingly become clear: The federal government has been using measures that affect Canadians from coast to coast in the same way, but the degree of overvaluation in local housing markets varies tremendously. Price gains in Toronto, Calgary and Vancouver are eclipsing those in much of the country, and some markets are downright sluggish. Could municipalities take the lead, with measures that are tailored to their markets?

Enter the land transfer tax. No one is advocating this as the solution to inflated prices, but the idea of finding policies that zero in on the actual problem markets is worth a discussion.

A number of provinces and cities in Canada already have land transfer taxes, which are paid by real estate buyers. Toronto’s land transfer tax is progressive in that it varies with the value of the property (0.5 per cent on the first $55,000, 1 per cent from $55,000 to $400,000 and 2 per cent over that). The Ontario Real Estate Association says that it amounts to about $4,000 for the average home.

The Ontario Real Estate Association has launched its campaign about the negative impacts of the tax because municipal elections are in about a month.

“Municipalities across Ontario are looking to the province for new revenue tools or taxes,” the association’s president, Costa Poulopoulos, said in a press release. “One of the tools being considered is a second [i.e., municipal, in addition to the provincial tax] land transfer tax on home buyers, similar to the tax imposed by the City of Toronto. This tax carries a huge cost – no Ontario city can afford the kind of job losses Toronto has experienced because of the municipal land transfer tax.”

The association points to a research study done by Altus Group, a real estate consultancy, that argues that Toronto’s land transfer tax, which has been in effect since 2008, has significantly slowed down home sales. It estimates that 38,278 resales didn’t take place between 2008 and 2013 because of the tax. A report by the C.D. Howe Institute has estimated that the tax reduced real estate transactions by about 16 per cent. The city of Toronto imposed the tax purely to raise money – but it sounds like something that would have made that late Mr. Flaherty pretty happy.

“Depending on the size and structure of the tax levied, the LTT would lead to weakening in affordability and cool the housing market,” says Derek Burleton, deputy chief economist at Toronto-Dominion Bank. He added that a challenge for policy makers would be putting in place a tax that cools the market without tipping it toward a dramatic decline. For instance, if Toronto changed its land transfer tax or other cities imposed one at the same time as mortgage rates were rising, it could cause a major correction.

What if the tax were temporary, and would automatically be repealed when mortgage rates hit a certain level?

Canadian Imperial Bank of Commerce economist Benjamin Tal, while noting that he’s neither in favour nor against the idea, says such a tax could soften the impact of any future market correction by making the market more static. “And this is a more targeted way of looking at things,” he says.

Mr. Burleton notes that “over the longer term, there are concerns that a LTT would reduce mobility of people, which would have a negative unintended consequence on job markets and economic growth.”

He also points out that the tax reduces the affordability of homes, making it harder for potential movers to buy a home that they might have otherwise, so it drives down the after-tax price of a home, other things being equal.

“The LTT is a remarkably bad tax,” Mr. Poschmann says. “It keeps people where they are, as opposed to where they want to be, and blocks transactions that should have occurred – by definition, a nasty drag on the economy. And that makes it not a very good tool for dealing with a problem that you don’t and can’t know if you have.”