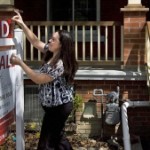 The average price of a Canadian home was $401,585 in July, a five per cent rise compared to last year.

The Canadian Real Estate Association repeated its claim that booming sales in the large, pricey markets of Vancouver and Toronto are skewing the national average higher.

If those two cities are stripped out of the equation, the average Canadian home is worth $327,988 and the year-over-year increase shrinks to four per cent.

The real estate market is going strong, based on the number of houses being sold.

Sales have been climbing steadily — rising slightly for the sixth consecutive month.

July marks the highest level of home sales since March 2010, the agency said. Sales activity was 7.2 per cent higher than the same month a year ago.

Increases in sales activity for July also grew in markets such as Victoria and Winnipeg, and the Ontario markets of Ottawa, London and St. Thomas.

“On the surface, national sales activity in July was similar to what we saw in May and June,” said CREA president Beth Crosbie. “That said, July sales picked up in markets that struggled to gain traction in the spring, while activity eased slightly in some of Canada’s largest urban markets.”

This growth shift from Calgary, Toronto and Vancouver to other regions of Canada could indicate a future trend.

“This could mark the start of less regional diversity in housing markets, which saw strength generally in the Western provinces and weakness in Central and Atlantic Canada (except Toronto),​” Sal Guatieri, senior economist​ at BMO Capital Markets.

“The renewed momentum in Canada’s housing market in recent months represents both a bounce back from weather-related weakness over the winter months and a response to lower mortgage rates,” said Leslie Preston of TD Economics.

“Potential buyers who may have sat on the sidelines last year as interest rates rose, are being enticed back to the market by lower interest rates. Meanwhile, a strengthening in economic growth continues to support the fundamental demand in the housing market.”

Market may cool off

This growth spurt may not last much longer.

TD Economics believes that the Canadian housing market will cool later this year and into the next.

Preston says existing home prices “…are on track to outstrip income growth for a second straight year in 2014, which adds to concerns about an already-overpriced market.”

She adds that a likely increase in interest rates and the added supply of new homes currently under construction are expected to weigh on prices as well.

Until this happens however, Guatieri remains concerned with THE upward climb of prices in Calgary, Toronto and Vancouver.

“While there will always be condos to satisfy the demand for reasonably affordable housing in these cities, the widening gap in prices versus detached homes means that a lot of young, growing families will be forced to live the condo lifestyle for much longer than they intend.”