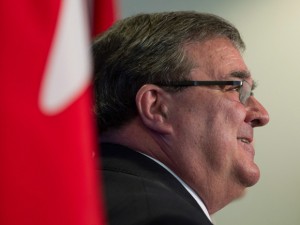 Finance Minister Jim Flaherty said he isn’t planning new measures to restrain the country’s housing market because his past four rounds of action have already worked to avoid a bubble.

A housing crash based on the type of home you have? Is that really possible?

It certainly didn’t happen that way in the early 1990s. When the real estate market crashed in Toronto, the entire housing sector saw prices plunge. Even commercial real estate tanked in the high-interest rate environment.

“So far, I’m satisfied that we have a balance in the real estate sector,” Flaherty told reporters in Wakefield, Quebec, at the start of a policy retreat with business leaders. “There are some bumps along the road in Toronto and Vancouver, in particular in the condo markets, but overall, I’m satisfied,”

Flaherty has warned consumers to avoid mortgages that could become unaffordable when borrowing costs rise, after Canadians took on record household debts relative to disposable income.

Flaherty said that “we have been watching the condo market and the housing market very closely for at least five years.” He also said that he does have “contingency plans” he can use if the need arises.

The Bank of Canada has identified household finances as the biggest risk to the domestic economy, while Governor Stephen Poloz has said there are recent signs of a “constructive evolution” in that area.

Flaherty today also reiterated his own commitment to pare the federal budget deficit and spoke out against the extraordinary monetary stimulus seen in the U.S. and Europe.

“We are going to balance the budget without doubt in 2015,” Flaherty said, adding that this will “put Canada in a position of strength” to react to any future global weakness.

“We in Canada haven’t been fans of quantitative easing, unlike the United States and elsewhere,” Flaherty said. “The danger in the longer term to me as a finance minister is inflation.” He said the policy may be discussed at the next meeting of Group of 20 officials.

Canada has been a destination for global bond investors because of the country’s top credit ratings, deficit reduction and stable economy, Flaherty said.

“We can sell anything we produce in Canada around the world, whether it’s in Canadian dollars, U.S. dollars or euros,” Flaherty said in reference to sales of his government’s bonds.

He attributed the record $19-billion divestment of Canadian bonds by foreign investors in June to “some weakness in the Canadian dollar,” without elaborating.

Canada’s dollar depreciated by 1.4% against the U.S. dollar in June following a May decline of 3%. Investors and economists attributed the bond sale to concerns that interest rates will rise as the U.S. Federal Reserve scales back its bond purchases and signs of faster growth in the U.S. and Europe.