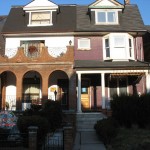 Prices in Canada’s largest housing market show no sign of letting up, driven by a strong demand for single-family homes in Toronto’s core.

The Toronto Real Estate Board said Tuesday that the average sale price of a home in the Greater Toronto Area climbed another 10.1% from a year ago and reached $524,868.

So far this year, there has been no relief on the listings front for these home types in many neighbourhoods in Toronto

“Price growth for the GTA as a whole was driven by the single-detached, semi-detached and townhouse market segments in the city of Toronto. So far this year, there has been no relief on the listings front for these home types in many neighbourhoods in Toronto and surrounding regions. Until we see a marked and sustained increase in listings, we should expect to see the annual rate of price growth above the long-term norm,” said Jason Mercer, TREB’s senior manager of market analysis, in a release.

Despite the strong prices, sales in April were relatively flat from a year ago with only a 1.8% increase in transactions. TREB says the city’s double land transfer tax has prompted homeowners to stay put and renovate their homes. 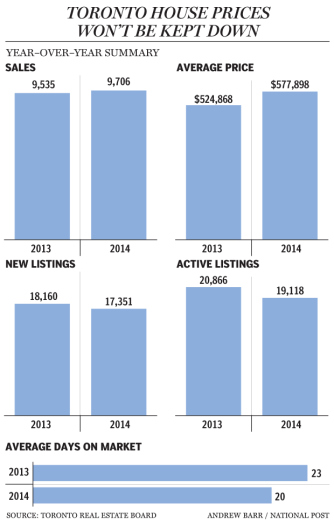 “In the broader GTA context, above-trend home sales in the years leading up to the recession have meant that many households who purchased during this period simply aren’t ready to move again,” said Dianne Usher, president of the board, in the release.

The strong single family home market contrasts with the condominium market where prices are not rising as rapidly.

Urbanation Inc., a condo research firm, said Tuesday the average selling price for all units in development is by 3% annually to $549 per square foot. Asking prices for unsold units edged up for the first time since mid-2012 to an average of $574 per square foot.

“Toronto’s new condo market has proven resilient in early 2014, although activity remained very centralized and some new projects were likely pulled forward into the first part of the year. As sales pick up in the outer 416 and 905 markets, overall volumes will be able to sustain this recent pace” said Shaun Hildebrand, Urbanation’s senior vice-president, in a release.