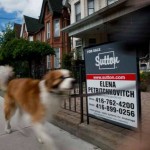 A lukewarm summer didn’t cool off Toronto’s red hot housing market which remains in sellers’ territory, according to the city’s realtors.

“The number of listings in August was down in comparison to last year while the number of sales increased. This means the sellers’ market conditions remained in place with a lot of competition between buyers, said Jason Mercer, director of market analysis with the Toronto Real Estate Board, in a release.

Sales growth was experienced in all segment of the market and across the greater Toronto area. Condominiums experienced the weakest price growth but the average sale price in the GTA still climbed 4.4% from a year ago to $352,942.

Toronto’s stellar results come on top of data released from Vancouver and Calgary which show prices continue to rise in those cities, indicating national averages will likely climb when those numbers are released mid-month.