Home prices rose across the Greater Toronto Area in October, matching similar gains in Calgary and Vancouver which should continue to inflate national housing numbers due out later this month. 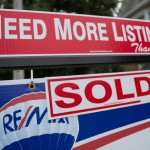 “Strong growth in sales was evident across all major home types during the first full month of fall. This suggests that there are a lot of households across the Greater Toronto Area who remain upbeat about the benefits of home ownership over the long term, whether we’re talking about first-time buyers or existing home owners looking to change their housing situation,” said Paul Etherington, president of the board, in a release.

Related Vancouver home sales jump 15% in October from a year ago and prices are still climbing, too Calgary’s condo market booming as average price for single-family homes tops half a million Downtown living, where properties are small, but convenient, seen as driving force in 2015 real estate GTA sales were up 7.7% in October, gains that follow reports earlier this week that October Vancouver sales were up almost 15% from a year ago while Calgary condo sales jumped 14% during the same period.

Concern has been raised that those three markets may be skewing the national price figures which are due out on Nov. 15, a sentiment that even Joe Oliver, the finance minister, has expressed. The government has intervened four times to tighten mortgage rules, but Mr. Oliver has so far rejected further regulation.

In the Toronto market there are few signs of price growth slowing, with the exception of the condo sector which saw 2.5% year over year price growth for October.

It’s a much different story for low-rise housing. Detached home prices across the GTA rose 9.6% in October from a year ago while semi-detached and townhouses were up 8% and 9.5% during the same period, respectively.

Analysts have suggested provincial land use policy encouraging intensification have created the dichotomy between high-rise and low-rise housing in the GTA. The spread between low-rise home prices and condominiums prices has never been greater, according to Toronto builders.

“While sales growth has tracked strongly so far this fall, many would-be home buyers have continued to have difficulties finding a home due to the constrained supply of listings in some parts of the Greater Toronto Area, particularly where low-rise home types are concerned. The resulting sellers’ market conditions are forecast to drive strong price growth through the remainder of 2014 and indeed into 2015 as well,” said Jason Mercer, TREB’s director of market analysis, in a release.