Trade and Investment to Support Canada’s Economy In 2013: RBC Economics 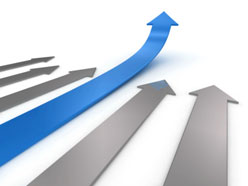 TORONTO, June 19, 2013 — Canada’s economy started 2013 growing at a solid clip, as energy production continued to recover and the U.S. economy proved to be more resilient to a recession than was feared, according to the latestEconomic and Financial Market Outlook issued today by RBC Economics. Following an increase in Canadian GDP output of 1.7 per cent in 2012, RBC raised its real GDP growth forecast to 1.9 per cent through 2013 and expects a firmer 2.9 per cent rise in 2014.

The first quarter of 2013 saw a marked turnaround in the domestic economy, with Canada realizing a solid 2.5 per cent annualized gain, supported by a sharp turnaround in net trade which added 1.4 percentage points to the quarterly growth rate – the largest contribution since mid-2011.

“The improving trade balance underpins our forecast for Canada’s economy to grow at rates which should help propel the economy to full capacity in early 2015,” said Craig Wright, senior vice-president and chief economist, RBC. “Stronger demand for autos, houses and industrial machinery from the U.S. will help sustain the lift in export growth that Canada experienced so far this year for the remainder of 2013.”

Businesses reduced the pace of investment in structures and capital goods in recent quarters, likely a reflection of the uncertainties surrounding the effect of U.S. government’s fiscal restraint on U.S. demand for Canadian goods. Easy financial conditions in Canada coupled with indications that the U.S. will clear the fiscal cuts in good stead will support a rebound in business spending in the quarters ahead, RBC says.

“Company balance sheets are healthy – business financing made headway in early 2013 and will continue to provide Canadian firms with the capacity to invest at an accelerating rate in 2014,” said Wright. “After rising an expected 3.7 per cent this year, business spending will strengthen to 7.3 per cent in 2014.”

RBC says export recovery and business investment are necessary to keep the economy on track and to offset a softer housing market. Residential investment is forecast to decline 2.4 per cent this year and 0.7 per cent in 2014. This slowing partially reflects overstated strength in 2012 when residential investment jumped 6.1 per cent as home sales increased – likely to avoid a tightening in mortgage lending and fear of mortgage rate increases.

Cooling activity in the housing market led to a reduction in the pace of mortgage debt growth to the slowest level since 2001 in April, easing concerns that the economy is vulnerable to a significant shock. In fact, RBC indicates that debt service costs remain historically low and one-third of households continue to be debt free.

“The firm labour market is another factor mitigating the risk that a debt-associated downturn is brewing,” noted Wright. “With employment at an all-time high and household income and savings on the rise, we expect household debt to remain in check, which should limit the weakness in the housing market and support consumer spending.”

An easing in household credit growth coupled with a low level of inflation set the stage for accommodative monetary policy in early 2013. RBC says that new Bank of Canada Governor, Stephen Poloz, will likely maintain interest rates at the current level for the remainder of 2013, and expects the Bank will start to reduce the amount of stimulus in the second half of 2014.

Globally, RBC expects the world’s economy to continue growing at a modest pace in the first half of 2013 as a result of Europe’s ongoing struggle to get out of recession and the U.S. economy absorbing government austerity measures. Growth is likely to accelerate later this year, however, as the benefits from structural changes combined with very supportive interest rates boost global economic momentum.

After a generally disappointing finish to 2012, the economic performance across the majority of Canada’s provincial economies improved in early 2013. RBC forecasts that natural resource-intensive provinces will remain at the top-end of the growth rankings in 2013 and that stronger exports will be the mainstay for many of Canada’s provinces.

Newfoundland and Labrador will outpace all other provinces by a long shot to stand atop the 2013 provincial growth rankings. The Prairies – Alberta, Saskatchewan and Manitoba – will continue to grow at the top-end. The remaining provinces are expected to stand slightly below the national average for growth.