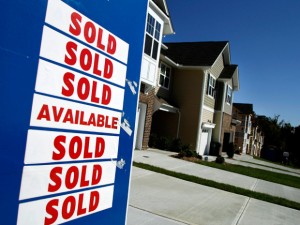 Last Wednesday Scotiabank sold the first Canadian bonds backed by consumer lines of credit in 12 years. The highly rated issue sold at market, according to a Bloomberg report, at an impressive 78 basis points over similar-term Canadian government bonds.

Critics may worry that such events signal a continuing explosion in household debt and a return of the boom and bust “wild West,” U.S.-style marketplace.

But there is another way to see it. The bonds’ risks will be borne by the issuer and investors, not unwilling and unknowing taxpayers, who back most of the mortgage risk in Canadian and U.S. housing markets.

And change is afoot in the North American housing finance system. The U.S. and Canada are market-testing new ideas, while more of them bubble through the heads of policymakers and legislators.

In the U.S., the Obama administration had swept into office amid a housing-triggered financial market crisis. Other than defending the ubiquitous and dubious middle-class “right” to home ownership and a 30-year mortgage, the administration has until recently mostly been wishing the issue away.

More activity in Congress. The most aggressive house bill, the “PATH” act championed by Jeb Hensarling, would attack head-on Fannie Mae and Freddie Mac, the government-controlled, taxpayer-backed mortgage insurers and securitizers. The agencies would be gone in five years – too long for some. A good idea, but unlikely to survive aggressive lobbying by U.S. homebuilders and mortgage originators and brokers, or to make it through the Democrat-controlled Senate, or to survive administration foot-dragging.

More narrowly focused, and aimed at smoothing the house-price rollercoaster, is a proposal from Bill Foster. The personable Representative Foster is one of those engaging gems the congressional system occasionally produces. Having cofounded as a teen an extraordinarily successful lighting controls company, and having spent a career as a particle physicist at Fermilab, Foster recently turned his understanding of control theory to politics and housing finance.

With the moral and intellectual backing of Roger Myerson, the University of Chicago Nobellist (mechanism design theory), Foster would tie maximum mortgage loan-to-value ratios, or minimum downpayments, to regional house price trends. The faster prices trend up, the higher the minimum downpayment.

The Holy Grail of housing finance – a market without taxpayer risk

This control mechanism is simple, and markets would always trend towards their natural equilibria, with lower peaks and shallower valleys. But it also would slow market responses to price signals. If bristling resource prices are driving demand for people and skills in North Dakota – or northern Alberta – why would we want to make it harder for people to move there?

Gaining bipartisan traction is the Senate’s Corker-Warner bill, for which the Obama administration kind of, sort of, has announced its backing. Corker-Warner also would fold up Fan and Fred, and replace them with another federal agency that reinsured marketable, mortgage-backed securities.

The twist is that the new securities would be 90% backed by the new federal insurer. The issuers would sell a risk-bearing 10% first-loss tranche in the private securities market. So rather than the federal agency fully guaranteeing timely payment of interest and principal, some securities buyers would take a hit if the underlying mortgage assets sank underwater.

Corker-Warner hardly removes the taxpayer from the risky mortgage market but it does hold the possibility of some risk landing with investors. That is better than having taxpayers bear the first risk and all the rest, as they now do in the U.S., and as is mostly the case in Canada.

These moves have sparked market and institutional responses. Perhaps owing to existential threat, Freddie Mac recently brought to market securities with just those characteristics, but bearing lower first-loss provisions, which the market was willing to bear at low interest rate spreads over U.S. Treasuries. Fannie Mae last week launched its roadshow for a similar product.

These are steps on the way to what market-watchers call the Holy Grail of housing finance – a residential mortgage-backed securities market that contains little or no taxpayer risk exposure.

Canada seeks the same grail – neither is there here a true private RMBS market. Finance minister Jim Flaherty has taken some steps towards it, by limiting the growth of the Canada Mortgage and Housing Corporation’s insurance book, encouraging the growth of a covered bond market, and barring new insured mortgages from covered bond pools or from backing securities other than those issued through CMHC.

The question of the day is whether a private market for taxpayer-lite RMBS soon can sprout in the U.S., or in Canada.

That brings us back to the Scotiabank bond issue. Scotia’s bonds sold at the low spreads they they did because buyers are protected from the first 17% of potential losses, enough to weather a significant market hit. That is a far cry from exposing buyers to the first 10% of losses, to be sure, but there is a world of difference between this arrangement and traditional CMHC-backed structures, whereby taxpayers, not securities investors, are exposed to 100% of potential losses.

Taken together, these are positive signs, and a message. Capital markets will work, if we let them. Political markets work too. We need not fear for their ability, eventually, to produce change.

Finn Poschmann is vice president, research, at the C.D. Howe Institute in Toronto.