Corporate landlords are benefiting from the worst U.S. rental-housing shortage in more than a decade as construction trails demand and more Americans opt to lease rather than buy.

There’s an undersupply of single-family houses 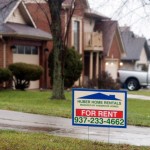 and apartments to rent for the first time since 2001, according to an analysis by Frank Nothaft, chief economist at mortgage buyer Freddie Mac, based on available inventory and historic vacancy rates. The deficit in the third quarter was about 350,000, the most in records dating back 14 years.

The shortage is giving the upper hand to institutional investors who spent more than US$25 billion since 2012 buying single-family homes to rent. While the market for apartments has been in favour of landlords for five years, owners of houses are now able to increase rents and reduce turnover to boost profits.

“It’s that supply-demand equation that allows us to get aggressive about raising rents,” Stephen Schmitz, chief executive officer of American Residential Properties Inc., a landlord with more than 8,500 homes, said at an investor conference this month. “Three years ago, you would go to raise somebody’s rent and they could say, ‘I’ll go down the street and pay US$100 less than I’m paying you now.’ But today they can’t because all those houses down the street are occupied.”

The U.S. rental-vacancy rate fell to 7.4% in the third quarter, according to Census Bureau data. The market is considered balanced, with neither landlords nor tenants having the upper hand when it comes to rents, at a vacancy rate of 8.2%, based on the average from 1994 through 2003, according to Freddie Mac’s Nothaft.

The housing surplus peaked at almost 2 million units, including 1.2 million rentals, in the third quarter of 2009, when foreclosures were soaring and years of speculative construction led to a glut of empty houses.

“The surplus of vacant housing has shrunk over the last few years because there has been household growth and limited new construction,” Nothaft said in a telephone interview. “In most markets and in the national data, what we’ve observed is that rents have been rising faster than inflation.”

Rents on all single-family homes and multifamily units are expected to climb 3.5% next year, compared with a 2.5% increase for home purchase prices, according to estimates this month by Zillow Inc. Chief Economist Stan Humphries. The U.S. inflation rate was 1.3% in November, with a goal of 2% set by the Federal Reserve.

Wall Street-backed landlords already are enjoying higher rents for single-family homes in markets hit hardest by the housing crash, where they first started buying in bulk.

The average monthly rent for a three-bedroom home in Phoenix surged more than 9% this year to US$1,158, data from Westminster, Colorado-based RentRange LLC show. Houses now lease about 10 days faster than apartments, according to a report this week from the Center for Real Estate Theory and Practice at Arizona State University.

A reviving job market is driving household formation and fuelling demand for homes faster than builders are delivering them. In the Orlando area, for example, 56,000 jobs were added in the 12 months through October, benefiting landlords such as Aaron Edelheit, chief executive officer of Atlanta-based American Home, a rental company with 2,500 houses, including about 200 in central Florida.

“They’re not producing many entry-level homes,” he said in a telephone interview. “That’s what creates housing shortages, and it’s going to drive up the price of rents.”

Raising rents is likely to become a higher priority for institutional single-family landlords next year as they get a better grip on operations and how higher rates affect their pace of leasing, said Anthony Paolone, an analyst with JPMorgan Chase & Co. who follows real estate investment trusts including American Homes 4 Rent and Silver Bay Realty Trust Corp.

Investors have positioned themselves to house some of the former owners of 5 million homes lost to foreclosure since the real estate crash, according to research company CoreLogic Inc. Many of those former owners prefer houses over apartments because they want more space for their children and pets. Landlords also are getting a boost from some of the 75 million millennials — 18-to-34-year-olds — who are starting out as renters rather than buyers.

The typical family renting a house from American Homes 4 Rent, an Agoura Hills, California-based REIT with more than 30,000 single-family homes, is in their mid-thirties with an annual income of US$80,400, enough to afford to buy if they wanted to, according to CEO David Singelyn.

“Many of these kids saw their parents lose their home, and they’re a little bit disillusioned,” Singelyn said at the Information Management Network Single Family Rental Investment Forum in Scottsdale, Arizona, on Dec. 4. “How long will that last? I don’t know. But today there’s a significant movement to becoming a renter nation as opposed to an owner nation.”

Those tenants often pay a premium to rent from new firms like American Homes 4 Rent, which mostly owns houses less than 12 years old near good schools and provides better service than mom-and-pop landlords, Singelyn said. They also move less often, with 68% of tenants opting to stay in the most recent quarter when their lease came up for renewal, compared with less than 50% for apartments, he said.

Blackstone Group LP’s Invitation Homes, the largest single-family landlord, with more than 46,000 properties, as of Sept. 30 raised rents an average of 1.8% to US$1,474 from a year earlier on 3,200 homes that were financed through the industry’s first mortgage-backed security deal, according to Kroll Bond Rating Agency.

“We’ve seen strong demand for our homes in all 14 markets we operate,” said Denise Dunckel, a spokeswoman for Dallas-based Invitation Homes. “That’s just an indication that there’s a large market that likes the flexibility that renting provides.”

American Homes 4 Rent raised rents 3% on renewals and 4% for new tenants in the third quarter, Singelyn said during a Nov. 3 conference call. American Residential Properties increased rents an average of 3.4% from a year earlier on renewals, while Silver Bay’s rents rose 3% on renewals.

Some of the recent rent increases and reduced turnover may be a result of seasonality, with fewer people moving in late autumn and winter, said Jeff Brock, CEO of Key Property Services, a Marietta, Georgia-based real estate investment and management company he founded in 2001.

“People don’t move during the winter unless they have to,” said Brock. “If the increases we are getting in the seasonal tightness hold up this spring and summer, when vacancy cyclically increases, then you are seeing an institutional effect on the way rents are going.”

Single-family landlords also face limits on their ability to raise rents because tenants with expensive leases have more options than apartment renters, according to Dave Bragg, an analyst with Green Street Advisors Inc. in Newport Beach, California.

“Many apartment renters purposely pay a premium for convenience and superior sub-market locations,” Bragg wrote in report this week. “The highest-earning single-family renters will likely ultimately buy a single-family home.”

While increasing rents may help the Wall-Street backed landlords, it may slow the recovery for families and communities hurt by the housing crash, according to Sarah Edelman, a policy analyst with the Center for American Progress, a Washington-based think tank aligned with Democrats.

“These companies can run profitable businesses without pushing rents higher than most families can afford,” she said.

Wall Street-backed firms have extended their purchasing even as property prices rise and low-cost foreclosures become harder to find, making it more important for them to charge higher rents to make a profit. Blackstone is spending as much as US$35 million a week on houses through Invitation Homes. While that’s down from last year’s peak of US$150 million a week, the company is still finding “attractive opportunities to invest,” Dunckel said.

American Homes 4 Rent is spending US$500 million a quarter on property, an amount constrained by limits on the ability to raise capital.

The largest firms are buying some homes in bulk, snapping up pools from investors who began acquiring rental homes after values plunged 35% from their July 2006 peak and expected to sell when prices rebounded.

“We see lots of US$5 million, US$10 million and US$15 million portfolios,” David Miller, CEO of Silver Bay, said in an interview at the Scottsdale conference.

While walking from a panel discussion to the restroom, he was handed about 15 business cards from people interested in selling collections of homes.

“There’s still plenty of opportunity to buy,” he said.