Lucky number seven. That’s where Vancouver finds it’s on Lonely Planet’s ranking of the top 10 cities for travel in 2014. (Tweet this fact) 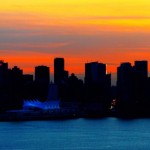 Lotus Land is sandwiched between number six Shanghai and number eight Chicago, the only other North American city included on the list. Sorry, top “brand” cities New York and Toronto.

The world’s best city for travel, according to Lonely Planet, is “The City of Love,” Paris, France.

Vancouver, regularly cited as one of the world’s “most livable cities,” was lauded by the travel publication for it’s natural surroundings:

Vancouver delivers on nature’s eye-candy – visit, and you’ll never be too far from spectacular mountain vistas, rambling evergreen parks and protected sandy beaches. You’ll appreciate the big-city-look/small-town-vibe the moment you arrive at the airport. Situated neatly on the Burrard Peninsula, a hotchpotch of office towers and hastily planned condos compete for the best of some of the world’s most expensive views, earning the nickname ‘City of Glass’. People live here because they love to run, bike, swim, ski and play. Boredom is not permitted here. If you simply can’t take any more of how good it gets, or it won’t stop raining, or you’ve run outta cash, head for the hills: Cypress, Seymour and Grouse Mountains and the world-famous Whistler (ski) and Blackcomb (snowboard) areas are within easy reach.

The rest of the best: