OTTAWA — New housing prices in Canada rose 0.1 per cent in October from September, the third consecutive month-on-month increase, on strength in the Vancouver metropolitan area, Statistics Canada said on Thursday.

The result matched analysts’ expectations. Prices in the Vancouver area grew by 0.4 per cent, the largest jump since a 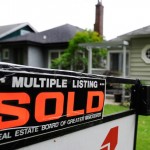 Related Bank of Canada for the first time warns house prices are overvalued by up to 30% Vancouver accounts for almost 12 per cent of the overall market. Prices in the combined region of Toronto and Oshawa, which represent a 28 per cent slice, increased by 0.1 per cent. Month on month, prices were up in eight of the 21 major metropolitan regions, down in three and unchanged in 10. The new housing price index rose by 1.6 percent compared with October 2013.

The new housing price index excludes apartments and condominiums, which the government says are a particular cause for concern and account for two-thirds of new housing. © Thomson Reuters 2014