Along with a jump in house sales, house prices in Vancouver have risen sharply and will likely continue to climb in the new year, pushing some frustrated house hunters to call for curbs on the foreign buyers they blame 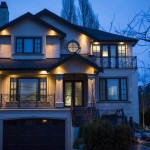 This brand new house on 6768 Arbutus St., in Kerrisdale, was designed specifically for the Asian market, according to the developer of this house. List price is $6.88-million, lot size is 12,800 sq. ft., house (not including garage) is 6,800 sq. ft. It also has a gold toilet.
(John Lehmann/The Globe and Mail)

for stoking the rapid ramping up of housing values.

B.C.’s real estate market powered through third-quarter 2013 as the number of sales rose 18.91 per cent this year over last, according to the most recent report by Landcor Data Corp., which bases its findings on provincial assessment numbers. The total value of those sales rose 25.62 per cent to $14.72-billion for July through September.

The outlook for 2014 is just as robust, says Helmut Pastrick, chief economist for Central 1 Credit Union. Mr. Pastrick forecasts prices to go up less than 5 per cent in 2014, with the greatest increase for single-family detached homes rather than apartments and townhouses. The Teranet National Bank Home Price Index, out earlier this week, showed prices up in Vancouver 3.9 per cent on an annual basis.

As usual, the market with the highest growth in sales volume was Greater Vancouver, with a 26.46-per-cent increase over 2012.

“Single-family detached [homes] are up a solid 6.39 per cent, propelling the average price of a Metro Vancouver detached manse to $869,772,” the Landcor report said.

Vancouver routinely shows up in surveys as one of the most expensive real estate markets in the world, requiring its residents to devote at least 84 per cent of their monthly incomes to housing costs.

But even areas outside the city are becoming unaffordable to residents such as Joy Mo, who came to Canada from China in 2001. Ms. Mo got shut out of the market when she and her husband sold their Coquitlam house and decided to rent for a year before purchasing a bigger house for their growing family. Ms. Mo has been renting a townhouse in Port Moody for the past four years, unable to find a house in the Tri-Cities area that falls within their $650,000 price range. They’ve put two offers on houses in the past three months and were out-bid on both of them, one by a foreign buyer.

Ms. Mo works as a court translator and she and her husband make a decent living.

Although some real estate analysts argue the lack of government data on foreign buyers is too anecdotal to confirm their impact, Ms. Mo disagrees. She was recently the subject of a South China Morning Post blog by Ian Young, in which she squarely blamed foreign buyers from around the world for driving the market.

She says you only have to look around to see that developers and marketers are catering to those buyers, particularly on the west side, in West Vancouver, Richmond, White Rock and the Tri-Cities area.

Because she’s from China, people often tell her she’s to blame for rising prices, but she’s not any different than the average middle-class resident. The government here, she says, should apply an extra tax to foreign owners.

Mayor Gregor Robertson recently said if warranted, he might consider a special property tax for foreign investors to try to control the high cost of real estate. But at this point, it’s less a plan than conjecture.

“Whenever we talk about building infrastructure, like bridges, tunnels, and that type of thing, we always cry about the lack of money,” Ms. Mo says. “Well, to me at least, [extra taxes for foreign buyers] is a way to generate some revenue.

“I am a Canadian citizen. If I go back to China, I am not allowed to purchase any property there. The government only allows it if you are a permanent resident there, and you have to purchase that house for your main residence. You can’t flip it or rent it out, that kind of thing.

“I’m not saying that’s wrong or right, but they know how to protect their market. I know Hong Kong has similar laws or regulations,” she says.

“I ask friends, ‘How do you find the housing market here?’ And they say it’s really cheap. They are surprised we don’t charge extra fees for foreign owners,” Ms. Mo says.

“On the one hand, we have immigrants like myself here, and we try to settle, and work very hard, trying to afford our homes. But on the other hand, there are really wealthy people from [China] coming here, and it’s not fair. They are our competitors. So why aren’t we doing anything?”