Welcome to the world’s most expensive apartment: $440-million penthouse comes with chauffeur, caterer and infinity pool 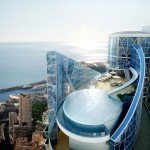 Even by the sky-high standards of Monaco, a penthouse at the top of the Odeon Tower is set to fetch a vertiginous price, according to developers.

Tour Odeon, which is under construction and when finished will be the principality’s first skyscraper since the Eighties, will be topped with a five-floor penthouse that would cost a potential owner 300-million euros ($440-million), making it the most expensive in the world.

www.odeon.mcTour Odeon will be Monaco’s first skyscraper since Prince Rainier banned tall buildings on the shoreline
to avoid overshadowing the city.

The penthouse will have several swimming pools, including a large infinity pool with a slide leading from a dance floor in the rooms above.

The 35,000 square-foot apartment will also come with a private chauffeur, a caterer, three staff bedrooms, a 24-hour concierge service and access to a health centre.

Tour Odeon, which will house 36 more luxury flats, will be Monaco’s first skyscraper since Prince Rainier banned tall buildings on the shoreline to avoid overshadowing the city. Instead he encouraged the development of wider, lower buildings built on an extension into the sea. His decision was reversed in 2009 by his son and successor, Prince Albert, and plans for the 560-foot Tour Odeon were drawn up.

www.odeon.mcThe view from a kitchen in an apartment in the Odeon Tower. So far, 26 flats have been sold.

One in three of Monaco’s 38,000 residents is a millionaire, according to a study by Spear’s magazine and WealthInsight.
Irene Luke, of Savills, the estate agency, who moved to Monaco in 1990 from London, said it was becoming increasingly popular with wealthy Britons.

“It’s becoming more and more like London by the sea,” she said.

www.odeon.msThe master bedroom in an Odeon Tower apartment. One in three of Monaco’s 38,000 residents is a millionaire.

The penthouse is expected to go on the market next year. So far, 26 flats have been sold.