Should you withdraw from your RRSP to buy a house? 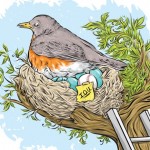 Ms. Brox, who works for Investors Group, says taking money out of an RRSP is the only way some first-time buyers can scrape together enough for a down payment.

“I think it’s a great idea, because one of the hardest things to do is get a big down payment. If you’ve got a couple with substantial amounts in their RRSP, you can take out 50 grand,” Ms. Brox says.

Canada’s Home Buyer’s Plan allows a first-time purchaser a one-time chance to withdraw up to $25,000 from their RRSPs, with the condition that the money be repaid in 15 years.

“When the program first came out, I wasn’t all that in favour of it,” says Ms. Brox. But when you see the prices of houses, it is getting that much tougher to buy.”

Dipping into an RRSP can help first-time home buyers avoid costly mortgage default insurance, which is required by Ottawa if you have a down payment of less than 20%. That insurance premium can run as high as 3.15% of the value of your loan if you only have 5% down, the minimum amount of equity required by a regulated financial institution.

Ms. Brox says borrowing requires discipline, because suddenly you’re not just saving for retirement, you’re also paying back a loan to your RRSP.

Related RRSPs can house a mortgage Feeding the debt monster is killing our RRSPs Should you raid your RRSP to pay debt? “I think most of my clients are [paying it back], but the bottom line is you are going to have to make some sacrifices. Do you need that extra car?” she says.

Repayment has become a problem for some Canadians, with up to one-third of first-time buyers never getting around to it, said Phil Soper, president of Royal LePage Real Estate Services.

Repayments are due in the second year following the year you made the withdrawal. (If you made a withdrawal sometime in 2015, your first payment would be due sometime in 2017.) Generally, you repay 1/15 of the total amount you withdrew every year until the loan is repaid.

The penalty for not making a repayment for a year is that the amount will be included in your income for that year. Even bankruptcy won’t get you out of repayment; you still have to make the annual repayment.

Mr. Soper says one reason the federal government has probably been loathe to increase the $25,000 withdrawal limit, even in the face of rising prices, is the repayment problems. But he’s still a proponent of the plan because it gets people to that 20% down payment threshold. That makes a $250,000 home, even if it’s a high-rise condo, attainable in most markets in Canada.

Mortgage broker Calum Ross says that at this time of year people have a unique opportunity if they are thinking about buying a home in the near term and have RRSP room. He suggests making a major contribution to your RRSP and simply withdrawing the money shortly thereafter — there is a 90-day period during which it must stay in your account — to buy a home.

“Even if you have to borrow, your debt-servicing numbers will still work,” says Mr. Ross, noting that the borrowing money is just being used for an RRSP contribution. “There are a lot of high-income professionals [who], because of a high barrier of entry into the market in some high-value markets, are still not homeowners.”

Royal LePage’s Phil Soper says he expects the housing market to slow down a bit, which could mean more activity from first-time buyers who see more affordability and are willing to access their RRSPs.

While people are increasingly using the tax-free savings account to save for a home, Mr. Soper says it shouldn’t be compared with the RRSP because it doesn’t allow people to reduce their tax burden and use that contribution to buy a home.

“The TFSA is money you’ve already paid tax on, so you’re not saving anything. It’s just a handy place to have money appreciate,” he says.